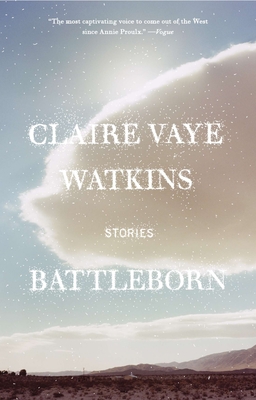 This collection of short stories is amazing — it is hard to believe it is Watkin's first! The surreal landscapes of her Nevada childhood populate each stunning story, and with this book Watkins cements herself as a truly western writer, managing to claim that designation without delving into the cliches of manifest destiny or the played-out "wild west" routine. But it’s not all descriptions of western topography — Battleborn begins with a semi-autobiographical story in which the author reveals that her father was Charles Manson's right-hand man! Watkins has turned her dramatic history into a brilliant and beautiful work of fiction.

“This extraordinary debut collection is the short story form at its finest. Linked by setting in the tradition of Annie Proulx, these 10 brave tales create a new mythology of the American West in a way that you've never experienced it before: From the desperate gold rush of the 49ers, to a tragic experience in a casino hotel, to the small, safe world a heartbroken woman creates in her bathtub. The writing is impeccable, the characters complex, and the stories full of heart and humanity. Do not miss this book!”
— Alise Hamilton, Andover Bookstore, Andover, MA

Winner of the 2012 Story Prize
Recipient of the American Academy of Arts and Letters 2013 Rosenthal Family Foundation Award
Named one of the National Book Foundation's "5 Under 35" fiction writers of 2012
Winner of New York Public Library Young Lions Fiction Award
NPR Best Short Story Collections of 2012
A Boston Globe, San Francisco Chronicle, and Time Out New York Best Book of the year, and more . . .


Like the work of Cormac McCarthy, Denis Johnson, Richard Ford, and Annie Proulx, Battleborn represents a near-perfect confluence of sensibility and setting, and the introduction of an exceptionally powerful and original literary voice. In each of these ten unforgettable stories, Claire Vaye Watkins writes her way fearlessly into the mythology of the American West, utterly reimagining it. Her characters orbit around the region's vast spaces, winning redemption despite - and often because of - the hardship and violence they endure. The arrival of a foreigner transforms the exchange of eroticism and emotion at a prostitution ranch. A prospecting hermit discovers the limits of his rugged individualism when he tries to rescue an abused teenager. Decades after she led her best friend into a degrading encounter in a Vegas hotel room, a woman feels the aftershock. Most bravely of all, Watkins takes on – and reinvents – her own troubled legacy in a story that emerges from the mayhem and destruction of Helter Skelter. Arcing from the sweeping and sublime to the minute and personal, from Gold Rush to ghost town to desert to brothel, the collection echoes not only in its title but also in its fierce, undefeated spirit the motto of her home state.

Claire Vaye Watkins is the author of Battleborn, winner of the Story Prize, the Rosenthal Family Foundation Award from the American Academy of Arts and Letters, and a Silver Pen Award from the Nevada Writers Hall of Fame. Battleborn was named a Best Book of 2012 by the San Francisco Chronicle, Boston Globe, Time Out New York, and Flavorwire, and a Best Short Story Collection by NPR.org. In 2012, the National Book Foundation named Claire one of the 5 Best Writers Under 35. Her stories and essays have appeared in Granta, One Story, The Paris Review, Ploughshares, Glimmer Train, Best of the West 2011, Best of the Southwest 2013, and elsewhere. A graduate of the University of Nevada Reno and the Ohio State University, Claire has received fellowships from the Writers’ Conferences at Sewanee and Bread Loaf. An assistant professor at Bucknell University, Claire is also the co-director, with Derek Palacio, of the Mojave School, a free creative writing workshop for teenagers in rural Nevada.

Winner of the 2012 Story Prize
Recipient of a 2014 Guggenheim Award
Recipient of the American Academy of Arts and Letters 2013 Rosenthal Family Foundation Award
Named one of the National Book Foundation's "5 Under 35" fiction writers of 2012
Winner of New York Public Library Young Lions Fiction Award
NPR Best Short Story Collections of 2012
A Boston Globe, San Francisco Chronicle, and Time Out New York Best Book of the year, and more . . .

“A real treat… Through remarkably assured writing that manages to be both bristly and brittle, Watkins chronicles despair and loneliness, catalogs valiant fights for survival and desperate please to be heard, and every time has us rooting for her underdogs.” –San Francisco Chronicle

“Although individual stories stand alone, together they tell the tale of a place, and of the population that thrives and perishes therein… The historical sits comfortably alongside the contemporary and the factual nicely supplements the fictional… Readers will share in the environs of the author and her characters, be taken into the hardship of a pitiless place and emerge on the other side—wiser, warier and weathered like the landscape.” –Antonya Nelson, The New York Times Book Review

"The most captivating voice to come out of the West since Annie Proulx - though it's to early Joan Didion that [Watkins] bears comparison for her arid humor and cut-to-the-chase knowingness." –Vogue

“The most exciting book of fiction I read this past year…To me, her gift is akin to that of those rare actors, like a Streep or a Brando, who can totally become a character but retain their own essence through and through…Fantastic stuff.”–Chang-rae Lee, A Year in Reading, The Millions

“Exceptional… A writer of great precision and greater restraint, Watkins is a natural storyteller whose material enriches that gift rather than engulfing it… One doesn’t have to be from the Battleborn state to recognize and appreciate literature that resonates like this.” –The Rumpus

"Absorbing… [Battleborn’s] true setting is a Faulknerian desert of the heart, where the soil is cursed by its precious metals and one’s personal history can be just as toxic. Clear-eyed and nimble in parsing the lives of her Westerners, one of Watkins’s strengths is not dodging that the simple fact that love can be tragic, involving, as it does, humans so flawed, so often tender and yet incapable.” –The Boston Globe

“A powerful new voice that deserves recognition… [Watkins maps] a regional portrait while pausing for detailed sketches, with a strong perspective that blends the romanticized past of Larry McMurtry, heartbreaking characters of Annie Proulx, and bleak timeless landscapes of Cormac McCarthy.” –The Onion AV Club

“As if Watkins’ prose embodies the desert landscape of Nevada itself, the stories are stony, unkind, and harsh, though never unattractive… Beneath these confessions runs a spiritual undertow—that salvific beauty can arise when brutality is brought to light… All of her stories left me feeling purged and oddly cleansed, easily making Battleborn one of the strongest collections I’ve read in years.” –The Millions

"Her incredible talent fills every page of this raw, wild, soaring debut. She may be the coolest real-life literary lady we've discovered in quite a while." –Flavorwire

“As grounded as they are in real places, the stories are fictions, crafted with the skill of an artisan, working from the starting points of Mary Gaitskill and Aimee Bender.” –Los Angeles Times

"These stories are as spare and beautifully austere as the landscape of the American Southwest where they are set, the same landscape that shapes and hardens the characters and refines them down to their fundamental elements, working them until they are all sinewy muscle and steely resolve. This is a stunning debut from an important young writer, and if it is a promise of what’s to come in the future of American fiction, we are in very good hands indeed." –Bookriot

"Vibrant and assured… The settings of Watkins' home state—evoked with craft that echoes Cormac McCarthy or Richard Ford—were the perfect settings for heartbreak." –Time Out New York

"What distinguishes Watkins' work… is her command of time. Nearly all the stories are set in the present, but her characters constantly live with aftereffects of the past. They're not simply "scarred" by history; they're irradiated by it, queasily lit from within.” –Minneapolis Star-Tribune

“[An] assured debut… Here’s hoping Watkins will continue to delve into Nevada’s unsound caverns and emerge with such worthy plunder.” –Dallas Morning News

“In her debut short story collection Battleborn Claire Vaye Watkins marries character to landscape as well as anyone I have read in years. These stories set in the Nevada desert are gritty and brilliant, and foretell an auspicious literary future for their author.” –Largehearted Boy

"A coolly impressive new voice of the American West." –The Financial Times

"The people in Battleborn… aren’t characters in stories, but human beings perpetually yearning for warmth… Entering the varied lives is akin to watching a tightrope walker high overhead, moving with steady confidence without a net… Watkins writes with precision and care, the sentences themselves as surprising as the events, the dialogue, and the spare description… There is a purity to the prose that is a constant pleasure to read… There is great originality in these narratives… But the generosity and personal sacrifices of the people are as universal as the stars at night." –Chris Offutt, Publishers Weekly (starred review)

"Readers... will find much to admire in this arresting collection, which one hopes is merely the first stop along the way for a writer who deserves a sustained literary life." –Library Journal (starred review)

“A fresh, fierce, fabulous collection. Watkins writes like the divine Didion—cool and clean with not a word wasted. Where’d she come from? I’m glad she’s here.” –Joy Williams, author of The Quick and The Dead

“Claire Vaye Watkins is never, ever satisfied with the ordinary. Each story in this brilliant debut surprises. Watkins offers us amazing visions of a funny, savage, haunted West-and one of the most outstanding short story collections in recent memory.” –Christopher Coake, author of We’re in Trouble and You Came Back