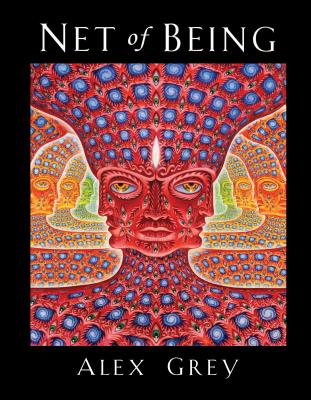 By Alex Grey, Allyson Grey (With)
$40.00
Not Available In-Store - Usually Ships from Warehouse in 1-5 Days

Alex Grey's artwork to me is the closest representation of what classic philosophy tries to define as the Sublime, or the highest state of being one can achieve. Net of Being is such a rich compendium of Grey's work and truly represents his voice as an artist. If you like or know the band Tool, chances are you probably already know about this book. If you don't, I highly suggest at least exploring this artist's work if you like metaphysical concepts. Grey has a knack for exploring the beautiful side of human consciousness.

• Includes over 200 reproductions of Grey’s artwork

Revealing the interwoven energies of body and soul, love and spirit that illuminate the core of each being, Alex Grey’s mystic paintings articulate the realms of consciousness encountered during visits to entheogenic heaven worlds. His painting Net of Being--inspired by a blazing vision of an infinite grid of Godheads during an ayahuasca journey--has reached millions as the cover and interior of the band TOOL’s Grammy award–winning triple-platinum album, 10,000 Days. Net of Being is one of many images Grey has created that have resulted in a chain reaction of uses--from apparel and jewelry to tattoos and music videos--embedding these iconic works into our culture’s living Net of Being.

The book explores how the mystical experience expressed in Alex Grey’s work opens a new understanding of our shared consciousness and unveils the deep influence art can have on cultural evolution. The narrative progresses through a successive expansion of identity--from the self, to self and beloved, to self and community, world spirit, and cosmic consciousness, where bodies are transparent to galactic energies. Presenting over 200 images, including many never-before-reproduced paintings as well as masterworks such as St. Albert and the LSD Revelation Revolution and Godself, the book also documents performance art, live-painting on stage throughout the world, and the “social sculpture” called CoSM, Chapel of Sacred Mirrors, that Grey cofounded with his wife and creative collaborator, artist Allyson Grey.

Alex Grey is the author of Sacred Mirrors and The Mission of Art. His work has graced the album covers of Nirvana and the Beastie Boys, has appeared in Newsweek, and has been exhibited around the world, including the New Museum and Stux Gallery in New York City, the Grand Palais in Paris, and the ARK exhibition space in Tokyo. In 1999 the Museum of Contemporary Art in San Diego honored Grey with a mid-career retrospective. He lives in New York with his wife, artist Allyson Grey, and their daughter, actress Zena Grey. In 2019, Alex Grey was cited as one of the "100 Most Spiritually Influential Living People in the World" according to Watkins Mind Body Spirit magazine.

Allyson Grey is an accomplished visionary artist with a Master of Fine Arts degree from Tufts University. She has taught art at Tufts University, the Boston Museum School, and Omega Institute. In 2004, Allyson and her husband, artist Alex Grey, opened the Chapel of Sacred Mirrors (CoSM) in New York City, a gallery and sacred space for Alex’s original paintings and other visionary artworks. In 2009, CoSM, now a church, moved from Manhattan to the Hudson Valley. Allyson Grey lives in Brooklyn and Wappinger, New York.

“...possibly the most significant artist alive. Alex’s work, like all great transcendental art, is not merely symbolic or imaginary: it is a direct invitation to recognize and realize a deeper dimension of our very own being.”
— Ken Wilber, author of Integral Life Practice and Sex, Ecology, Spirituality and A Brief History of E

“Inspired by Allyson Grey, every single image that flows into vivid being from Alex’s magical hand awakens, energizes, enlightens, and overjoys! The Net of Being is an ageless, yet now, glimpse of the ‘Jewel Net of Indra,’ the divine Buddhist image for the mutual interpenetration of all beings and things, from the subatomic to the trans-galactic. It takes your breath away, in the best way possible!”
— Robert Thurman, Jey Tsong Khapa Professor of Indo-Tibetan Buddhist Studies, Columbia University, Co-

“Alex Grey’s artworks bring together the tangible outer worlds investigated by scientists—full of molecules, bodies and stars–and the intangible visionary inner worlds—full of light, shadow and spiritual beings—known mainly to mystics.”
— Albert Hofmann, inventor of LSD and author of LSD: My Problem Child

“Through his art, writings, and activism, Alex Grey shares his many insights into the nature of being and the universe at large. At the same time, he makes a compelling case for supporting and nurturing all forms of creative practice.”
— David S. Rubin, The Brown Foundation Curator of Contemporary Art at the San Antonio Museum of Art

“Alex Grey’s ability to portray the normally hidden mystical dimensions of the human body and the cosmos are extraordinary and unique. His amazing visionary art is in a category of its own!”
— Stanislov Grof, M.D., author of The Cosmic Game and Psychology of the Future and When the Impossible

“Alex Grey’s images connect with people effortlessly, on a deep intuitive level, and empower them to imagine a deeper and more meaningful world beneath the veneer of mundane everyday reality. He touches on themes that are so universal, so instantly recognizable, that upon seeing his art for the first time, it may already feel familiar…It seems that part of the reason people react so strongly to Alex’s work is because it touches them in a way that feels right, that nurtures and heals and perhaps fills some kind of void in their view of the world. This is perhaps one of the highest purposes that art can serve.”
— Guy Aitchison, author of Reinventing the Tattoo, and Organica

“A dazzling visual epic into mystical realms of consciousness, Net of Being is a gorgeously kaleidoscopic book tracking the psychedelic, Gaian, and galactic rise of a new planetary culture. Not just a work of writing and art, it’s an interdimensional chrysalis for the awakening of humanity.”
— Jonathan Talat Phillips, author of The Electric Jesus: The Healing Journey of a Contemporary Gnostic

“Net of Being is Alex Grey’s memoir in images and words: a report on an astonishing life, a fearless communication of a world–view, and a love letter to the planet. His formidable skill and imagination as an artist and unshakeable good will have allowed him to explore past any reasonable boundary and bring back visions that are part of the permanent iconography of our time.”
— Roger Lipsey, author of The Spiritual in Twentieth–Century Art

“There was a time when expeditions into the unknown were always accompanied by an artist to depict the newly discovered landscapes. Alex Grey is one of those kinds of artist, but in his case he explores our parallel realities and brings them back alive. He is the Albert Bierstadt of inner space.”
— Fred Tomaselli, artist

“Through his art and writings, Grey shares his many insights into the interconnected nature of life, spirit, and the universe as a whole and his artistic plans for the future. A stunning hardcover art book for Alex Grey fans, visionary art lovers, and explorers of interdimensional spirituality.”
— Merikah Robertson, Common Ground, November 2012

“From Private Sanctuaries to the covers of Grammy-award winning albums, Alex Grey’s art has become embedded in our modern, global culture, making him the mystical artist for this new millennium.”
— Anna Jedrziewski, Retailing Insight, December 2012

“An impressive, coffee table tome that blends metaphysical themes with uniquely original images and informative commentary, Net of Being is highly recommended to the legions of Alex Grey fans, to students of metaphysical imagery, and to both community and academic library Metaphysical Studies and Art History reference collections.”
— Wisconsin Book Watch, January 2013

“Net of Being by Alex Grey belongs in both the arts and spirituality sections of any library, and will appeal across the board into new age and music audiences...A ‘must’ for any alternative and new age arts holding!”
— Midwest Book Review, February 2013

“One can’t help but be impressed with Alex Grey’s voluminous output over the course of his career-to-date as chronicled within Net of Being. Not only does the book introduce many paintings completed during the eleven years since Alex’s last large-format art book was published, but it also contains numerous older pieces that weren’t featured in his earlier books. ”
— Erowid, December 2013
My Account • Sign In • Sign Out • Register
NEW & USED BOOKS
AUTHOR EVENTS • GIFTS
Changing Hands Tempe
6428 S McClintock Dr, Tempe, AZ 85283
480.730.0205
[Google Map]
Mon-Fri: 10-9 | Sat: 9-9 | Sun: 10-6