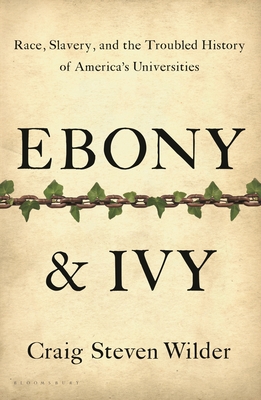 A 2006 report commissioned by Brown University revealed that institution's complex and contested involvement in slavery-setting off a controversy that leapt from the ivory tower to make headlines across the country. But Brown's troubling past was far from unique. In Ebony and Ivy, Craig Steven Wilder, a rising star in the profession of history, lays bare uncomfortable truths about race, slavery, and the American academy.

Many of America's revered colleges and universities-from Harvard, Yale, and Princeton to Rutgers, Williams College, and UNC-were soaked in the sweat, the tears, and sometimes the blood of people of color. The earliest academies proclaimed their mission to Christianize the savages of North America, and played a key role in white conquest. Later, the slave economy and higher education grew up together, each nurturing the other. Slavery funded colleges, built campuses, and paid the wages of professors. Enslaved Americans waited on faculty and students; academic leaders aggressively courted the support of slave owners and slave traders. Significantly, as Wilder shows, our leading universities, dependent on human bondage, became breeding grounds for the racist ideas that sustained them.

Ebony and Ivy is a powerful and propulsive study and the first of its kind, revealing a history of oppression behind the institutions usually considered the cradle of liberal politics.

Craig Steven Wilder is a professor of American History at the Massachusetts Institute of Technology, and has taught at Williams College and Dartmouth College. The author of A Covenant with Color and In the Company of Black Men, he was recently featured in the news-making documentary The Central Park Five. He lives in Cambridge, Massachusetts.

“It is Mr. Wilder's vast and often seemingly banal catalog of mercantile transactions, charitable bequests, and academic and administrative appointments—all links in the chain that joins universities to slavery—that lends the book its disturbing power… a passionate recounting of the collective dehumanization of African-Americans coincident with the rise in power and prestige of the Atlantic college, particularly the Ivy League.” —Allegra di Bonaventura, Wall Street Journal

“Wilder knows a great deal about his subject and does not flinch from facing it head-on... there is much to admire in 'Ebony & Ivy' and much to learn from it.” —Washington Post

“A groundbreaking history that will no doubt contribute to a reappraisal of some deep-rooted founding myths.” —Kirkus Reviews (starred review)

“A well-researched and revealing look at the connection between American academia and American slavery.” —Booklist (starred review)

“Wilder's copiously documented argument exposes how deeply implicated American higher education has been in racial exploitation that has dispossessed and subjugated peoples of color so as to invest whites beyond measure. His is a study deserving of serious attention from anyone interested in America's history, institutions, or intellectual development.” —Library Journal