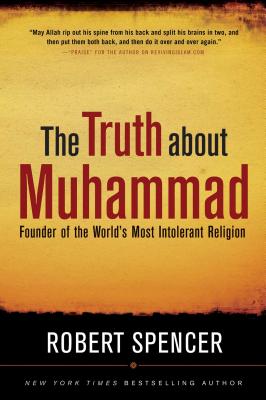 Muhammad: a frank look at his influential (and violent) life and teachings

In The Truth about Muhammad, New York Times bestselling author and Islam expert Robert Spencer offers an honest and telling portrait of the founder of Islam-perhaps the first such portrait in half a century-unbounded by fear and political correctness, unflinching, and willing to face the hard facts about Muhammad's life that continue to affect our world today.

From Muhammad's first "revelation" from Allah (which filled him with terror that he was demonpossessed) to his deathbed (from which he called down curses upon Jews and Christians), it's all here-told with extensive documentation from the sources that Muslims themselves consider most reliable about Muhammad.

Spencer details Muhammad's development from a preacher of hellfire and damnation into a political and military leader who expanded his rule by force of arms, promising his warriors luridly physical delights in Paradise if they were killed in his cause. He explains how the Qur'an's teaching on warfare against unbelievers developed-with constant war to establish the hegemony of Islamic law as the last stage.

Spencer also gives the truth about Muhammad's convenient "revelations" justifying his own licentiousness; his joy in the brutal murders of his enemies; and above all, his clear marching orders to his followers to convert non-Muslims to Islam-or force them to live as inferiors under Islamic rule.

In The Truth about Muhammad, you'll learn

- The truth about Muhammad's multiple marriages (including one to a nine-year-old) - How Muhammad set legal standards that make it virtually impossible to prove rape in Islamic countries - How Muhammad's example justifies jihad and terrorism - The real "Satanic verses" incident (not the Salman Rushdie version) that remains a scandal to Muslims - How Muhammad's faulty knowledge of Judaism and Christianity has influenced Islamic theology--and colored Muslim relations with Jews and Christians to this day.

Recognizing the true nature of Islam, Spencer argues, is essential for judging the prospects for largescale Islamic reform, the effective prosecution of the War on Terror, the democracy project in Afghanistan and Iraq, and immigration and border control to protect the United States from terrorism.

ROBERT SPENCER is the director of Jihad Watch, a program of the David Horowitz Freedom Center, and the author of eighteen books, including the New York Times bestsellers The Politically Incorrect Guide to Islam (and the Crusades) and The Truth About Muhammad . His latest book is Confessions of an Islamophobe (Bombardier Books) . Coming in summer 2018 is The History of Jihad From Muhammad to ISIS (Bombardier Books).
My Account • Sign In • Sign Out • Register
NEW & USED BOOKS
AUTHOR EVENTS • GIFTS
Tempe
6428 South McClintock Drive
480.730.0205
[Google Map]
Sunday-Friday 10am-8pm
Saturday 9am-8pm
Trade Counter 11am-6pm daily