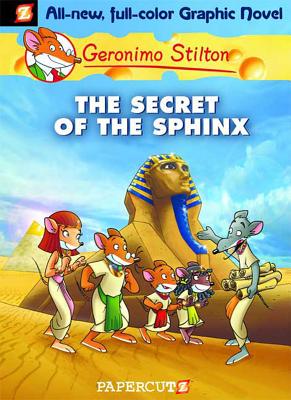 This is book number 2 in the Geronimo Stilton Graphic Novels series.

The popular children's story appears in graphic novel form for the first time in the U.S., with stories never seen in America. This time, Geronimo Stilton and friends must travel back in time to Ancient Egypt! The Pirate cats, jealous that the face of a man was placed on the body of the Sphinx, are determined to coerce the Pharaoh into changing the face of this monument. It's up to Geronimo and co. to travel back in time and stop the Pirate Cats before it's too late.

Stilton was awarded the Ratitzer Prize for his scoops on The Curse of the Cheese Pyramid and The Search for Sunken Treasure. He has also received the Anderson 2001 Prize for Personality of the Year. One of his bestsellers won the 2002 eBook Award for world's best ratling electronic book. In 2006 he won the Nickelodeon Kids Choice Awards and in 2008 he won the Cartoomics prize 'Beyond Comics'. His works have been published all over the globe.
In his spare time, Mr. Stilton collects antique cheese rinds. But what he most enjoys is writing books where he tells his fabmouse adventures!