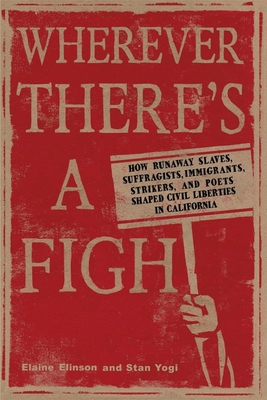 By Elaine Elinson
Email or call for price
Out of Print

Wherever There's a Fight captures the sweeping story of how freedom and equality have grown in California, from the gold rush right up to the precarious post-9/11 era. The book tells the stories of the brave individuals who have stood up for their rights in the face of social hostility, physical violence, economic hardship, and political stonewalling. It connects the experiences of early Chinese immigrants subjected to discriminatory laws to those of professionals who challenged McCarthyism and those of people who have fought to gain equal rights in California schools: people of color, people with disabilities, and people standing up for their religious freedom. The authors bring a special focus to the World War II internment of Japanese Americans, focusing on the infamous Korematsu case, which was foreshadowed by a century of civil liberties violations and reverberates in more recent times--regrettably, even today in the Patriot Act. And they follow the ongoing struggles for workers' rights and same-sex marriage. State and federal constitutions spell out many liberties and rights, but it is the people who challenge prejudice and discrimination that transform those lofty ideals into practical realities. Wherever There's a Fight paints vivid portraits of these people and brings to light their often hidden stories.
My Account • Sign In • Sign Out • Register
NEW & USED BOOKS
AUTHOR EVENTS • GIFTS
Tempe
6428 South McClintock Drive
480.730.0205
[Google Map]
9am-7pm daily