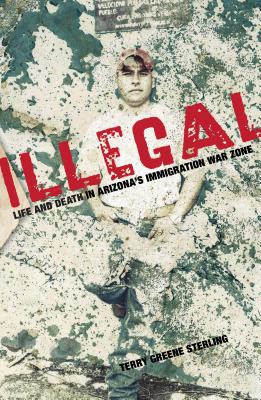 From a deadly border to America's kidnapping capital--the secret lives at the heart of the immigration controversy Arizona's violent border is the busiest gateway for illegal immigration in America, making Arizona Ground Zero for the immigration debate. No state is as hostile to the undocumented, and no city is as unwelcoming as Phoenix. Yet Phoenix is home to thousands who live in the shadows, where civil rights are neglected and lives are lost. Illegal sheds light on the invisible immigrants who persevere despite kidnappings and drug wars, an ongoing recession, and laws barring them from working, learning, and driving. By profiling these undocumented people, and those--like notorious Sheriff Joe Arpaio--who persecute them, author Terry Greene Sterling courageously reveals the changing face of immigration in America and gives new insight into a divisive national crisis.

Terry Greene Sterling is a Spanish-speaking award-winning journalist and photographer based in Phoenix, which is ground zero for the nation's immigration wars and home to most of Arizona's five hundred thousand or more illegal immigrants. She is Writer-in-Residence and a faculty associate at the Walter Cronkite School of Journalism and Mass Communication at Arizona State University. She has covered all aspects of the American West, including immigration and Latino issues, for twenty-five years. She has won more than fifty national and regional journalism awards, including several awards for diversity writing. She is a three-time winner of Arizona's highest journalism honor, the Virg Hill Journalist of the Year Award, and was a staff writer at Phoenix New Times for thirteen years. Her stories have appeared in numerous newspapers and magazines, including The Washington Post, Newsweek, salon.com, The Nieman Narrative Digest, Preservation Magazine, Arizona Highways, High Country News, and PHOENIX Magazine, where she is contributing editor. She also has a Master of Fine Arts degree in Creative Nonfiction from Goucher College in Maryland, where she studied with Tom French and Walt Harrington, two master narrative journalists. She is a member of Investigative Reporters and Editors and The American Society of Journalists and Authors. Her blog on her experiences and findings investigating the "border battle" in Arizona can be found at whitewomaninbarrio.com, an intereactive web site that includes photos, videos, maps locating border deaths, book tour events, etc. She can also be followed on Twitter.

Terry Greene Sterling puts a human face on a dishonest immigration debate. The sheriff is ugly, the laws harsh and pointless, the people poor, eager, huntedand the people are our new neighbors regardless of our neighborhoods. Read this moving and surprising book before speaking out on who belongs here and who does not. You’ll be happy you did.”

What a vivid portrayal of the Arizona immigrant underground. Illegal is not afraid to show the bad decisions immigrants make along with their resilience and strength of spirit. This is the total picture, a heartbreaking one in a state that has chosen to demonize its Mexican residents.”

No one brings you into the illegal immigration underground quite like Terry Greene Sterling. Her gritty descriptions of border crossers, transvestites, and child molesters will linger in your thoughts.  Her achingly beautiful accounts of everyday people and tragic situations really stick with you. From Sheriff Joe Arpaio's bravado to a locked-up mom’s longing for her child, the stories in Illegal are strikingly vivid, and the author’s reporting flawless. No one should even attempt to speak on the matter of illegal immigration in Arizona without reading Illegal first.”

Arizona is ground zero in America’s immigration battles and Terry Greene Sterling writes about the struggles of the people involved with authority, passion and compassion. Her insights and observations are detailed with nuance and substance that can’t be acquired by dropping in when the story is hot. This book and her blog, White Woman in the Barrio, reflect her ongoing commitment to telling stories about the people in addition to the policies that are front and center in the immigration wars. If you want to understand what is going on in Arizona now, Illegal is the book to read.”

[A] prize-winning journalist’s vivid stories of the real people behind the stereotypes, undocumented immigrants living with the already harsh legal atmosphere of Phoenix.”

At times, Sterling’s book reads like Shakespearean tragedy: people making difficult choices in impossible circumstances. And like classic tragedies, the cast of characters here includes opportunists, those who prey on the vulnerable, attention-seekers, and the well meaning. No wonder all of this leads to the extremes of human emotion, such as anger and rage. Throughout the book, Sterling’s telling of these stories is honest and thoughtful.”

"...documentation of the heart of an immigration war makes for an involving, thought-provoking survey for any discussion on illegal immigration and immigration and civil liberties in America."- Midwest Book Review