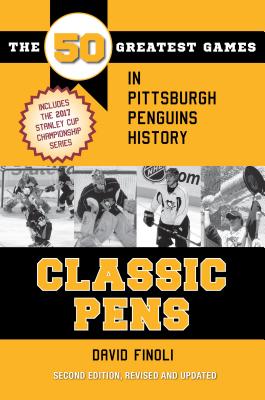 In the first edition of Classic Pens readers were reminded of the franchise's most memorable contests, from its beginnings in the 1960s through the 2010s. This new edition brings the team's standout games up to date, including their triumphant 2016 Stanley Cup victory.

During the Penguins' early years, it wasn't uncommon to buy a $5 ticket for a seat at the top of the Civic Arena (the "Igloo") and at the end of the first period move to a seat in the first row behind the glass. Except for a few winning moments scattered through their first three decades, the idea of a full-season sold-out arena was too farfetched, never mind the thought of a Stanley Cup. The only constant was that the Penguins were always in financial trouble and often threatening to move out of the Steel City.

The 1983-84 campaign proved to be the season that turned everything around. The Penguins' prize was Mario Lemieux, an 18-year-old center from Montreal, Quebec, who would lift the Pens out of the canyon of last-place finishes to the lofty heights of back to-back Stanley Cup championships in 1991 and 1992. Lemieux went on to become one of the greatest players the game had ever seen. He and teammates such as Jaromir Jagr, Tom Barrasso, Ron Francis, Joe Mullen, Kevin Stevens, Larry Murphy, and Paul Coffey soon made the Civic Arena the place to be.

In 1999 Mario Lemieux, now in his 30s, headed a group that purchased the club. The new ownership began a renaissance in which players like Sidney Crosby, Evgeni Malkin, Marc-Andre Fleury, Kris Letang, and Jordan Staal again made the Pens a powerhouse on the ice, led them to a third Stanley Cup championship in 2009, and secured one of the best new buildings in the NHL: the Consol Energy Center. In 2016 the Penguins qualified for the playoffs for the tenth consecutive season, winning their fourth Stanley Cup by defeating the San Jose Sharks in a 4-2 series.

In Classic Pens, author David Finoli's tour of the best moments in the Penguins' long history will evoke special memories from longtime fans and delight those who currently follow the team.

David Finoli is an author and sports historian who has written 22 books, mostly dealing with the history of sports in Western Pennsylvania, including two previous titles published by the Kent State University Press: Classic Bucs (2013) and Classic Steelers (2014). He is also a contributor to various books, magazines, and sports websites. Originally from Greensburg, Pennsylvania, Finoli lives in Monroeville with his wife Vivian and children Cara, Matt, and Tony.