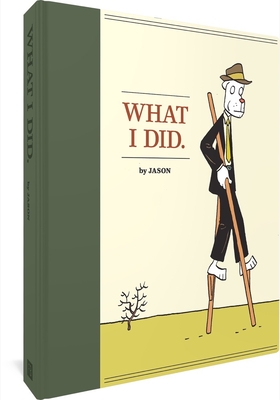 If the dog on stilts didn't grab you, then I'm sorry, there's no hope. Thankfully, hopelessness is one of Jason's choicest themes. Many authors make groundbreaking careers by making the bizarre or exotic seem familiar and relatable. Jason does the opposite. Growing up, getting a job, and falling in love in suburbia never looked so freaky and unnatural. You'll laugh till you cry.

This is an omnibus of three of the acclaimed cartoonist’s earliest graphic novels, which are about Scandinavian mysteries, childhood stunts gone wrong, and much more.

Collects Hey, Wait..., the first of Jason’s books to be translated to English, which tells the story of two childhood friends. A dreadful event midway through the story changes their lives forever; The Iron Wagon, an ingenious, atypically (for Jason) talky murder mystery set in early-20th-century Norway, adapted from a classic Norwegian novel by Stein Riverton—albeit starring Jason’s patented blank-eyed animal-headed characters and told in moody two-color panels.

When I read Jason for the first time, I was just as excited and devastated as the first time I read the poems
of Emily Dickinson and Walt Whitman. Jason’s work is poetry.
— Sherman Alexie