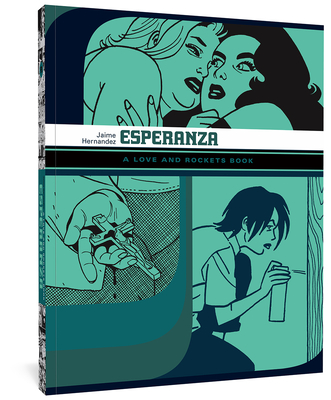 This is book number 9 in the The Complete Love and Rockets Library series.

Maggie deals with the past and Hopey moves into the future in the ninth volume of The Complete Love and Rockets Library and the fifth collection of the Locas storyline.

In the fifth batch of "Locas" stories by Jaime Hernandez, which originally ran from 2001–2007 in the pages of the Love and Rockets comic series, an older and wiser Maggie faces down the "Ghost of Hoppers" in a full-length graphic novel (which also introduces one of Jaime's greatest recent characters, Vivian the "Frogmouth," who creates chaos wherever she goes). Meanwhile, in “The Education of Hopey Glass,” Hopey (her Spanish birth name giving this collection its title) career transitions from tending bar to teaching kindergarten (while still juggling a complex love life). The final quarter of the book shows Maggie's lovable ex, Ray Dominguez, being dragged into the aftermath of a grisly murder thanks to his affair with the "Frogmouth."

...[I]f there’s one thingJ aime’s Locas stories in general, and this volume in particular, tell us, it’s that sometimes you have to be a grown­up for a long time before you grow up. It’s worth the work, and the wait.
— Sean T. Collins - The Comics Journal

I don’t really understand why the material of Love and Rockets isn’t widely regarded as one of the finest pieces of fiction of the last 35 years. Because it is.
— Neil Gaiman