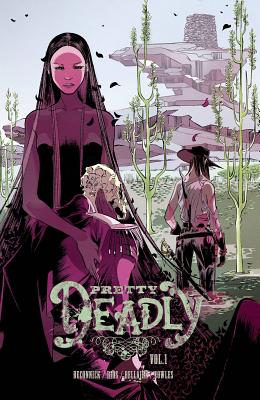 Kelly Sue DeConnick (Avengers Assemble, Captain Marvel) and Emma Rios (Dr. Strange, Osborn) present the collected opening arc of their surprise-hit series that marries the magical realism of Sandman with the western brutality of Preacher. Death's daughter rides the wind on a horse made of smoke and her face bears the skull marks of her father. Her origin story is a tale of retribution as beautifully lush as it is unflinchingly savage. "It's a perfect match for the gorgeous, dizzying artwork in a sumptuous palette-overlaid panels add intricate choreography to fight scenes, and detailed, whirling splash pages beg for long-lingering looks. Couple that, along with a handful of Eisner nominations, with a multicultural cast of tough-as-nails women who all fight for their own honor, and this is a series to watch out for." - Booklist "It's ambitious and challenging (two qualities that are not often valued, but that probably should be), under a fa ade of violence and sacrifice. Rio's art is lush and detailed, and is more than capable of keeping up with the far-reaching story." - PW
My Account • Sign In • Sign Out • Register
NEW & USED BOOKS
AUTHOR EVENTS • GIFTS
Changing Hands Tempe
6428 S McClintock Dr, Tempe, AZ 85283
480.730.0205
[Google Map]
Mon-Fri: 10-9 | Sat: 9-9 | Sun: 10-6