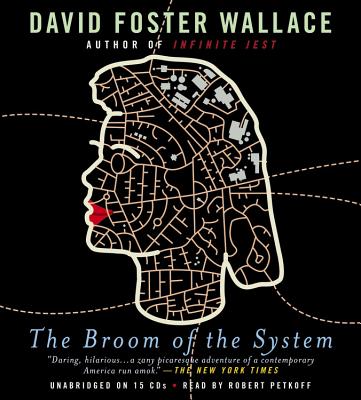 I was astonished by this book. Between the story of the main character trying to find Lenore (both her grandmother and herself), her parrot who repeats scripture, her brother who refers to himself as the antichrist, and the sessions with “about the worst psychologist of all time”, this book is nonstop fun. This book is witty, as well as absurd. I laughed out loud, and was alternately moved to introspection. I learned so much while reading because I constantly found myself lacking a good enough understanding to completely enjoy what Foster Wallace was delving into. I cannot wait to read this again to see what new experiences it has in store.

The "dazzling, exhilarating" (San Francisco Chronicle) debut novel from the bestselling author of Infinite Jest, available for the first time as an audiobook.

At the center of The Broom of the System is the betwitching (and also bewildered) heroine, Lenore Stonecipher Beadsman. The year is 1990 and the place is a slightly altered Cleveland, Ohio, which sits on the edge of a suburban wasteland-the Great Ohio Desert. Lenore works as a switchboard attendant at a publishing firm, and in addition to her mind-numbing job, she has a few other problems. Her great-grandmother, a one-time student of Wittgenstein, has disappeared with twenty-five other inmates of the Shaker Heights Nursing Home. Her beau (and boss), editor-in-chief Rick Vigorous, is insanely jealous. And her cockatiel, Vlad the Impaler, has suddenly started spouting a mixture of psychobabble, Auden, and the King James Bible, which may propel him to stardom on a Christian fundamentalist television program.

Fiercely intelligent and entertaining, this debut novel from one of the most innovative writers of our generation explores the paradoxes of language, storytelling, and reality.

David Foster Wallace was born in Ithaca, New York, in 1962 and raised in Illinois, where he was a regionally ranked junior tennis player. He received bachelor of arts degrees in philosophy and English from Amherst College and wrote what would become his first novel, The Broom of the System, as his senior English thesis. He received a masters of fine arts from University of Arizona in 1987 and briefly pursued graduate work in philosophy at Harvard University. His second novel, Infinite Jest, was published in 1996. Wallace taught creative writing at Emerson College, Illinois State University, and Pomona College, and published the story collections Girl with Curious Hair, Brief Interviews with Hideous Men, Oblivion, the essay collections A Supposedly Fun Thing I'll Never Do Again, and Consider the Lobster. He was awarded the MacArthur Fellowship, a Lannan Literary Award, and a Whiting Writers' Award, and was appointed to the Usage Panel for The American Heritage Dictionary of the English Language. He died in 2008. His last novel, The Pale King, was published in 2011.
My Account • Sign In • Sign Out • Register
NEW & USED BOOKS
AUTHOR EVENTS • GIFTS
Changing Hands Tempe
6428 S McClintock Dr, Tempe, AZ 85283
480.730.0205
[Google Map]
Mon-Fri: 10-9 | Sat: 9-9 | Sun: 10-6