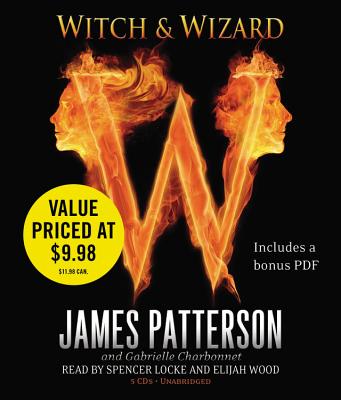 This is book number 1 in the Witch & Wizard series.

YOUR BOOKS, MUSIC, AND ART--BANNED BY THE NEW ORDER!

Everything is about to change. The government has seized control of every aspect of society, and this is the astonishing testimonial of Wisty and Whit Allgood, a sister and brother who were torn from their family in the middle of the night, slammed into prison, and accused of being a witch and a wizard. Thousands of young people have been kidnapped; some have been accused; many others remain missing. Their fate is unknown, and the worst is feared--for the ruling regime will stop at nothing to suppress life and liberty, music and books, art and magic . . . and the pursuit of being a normal teenager.

"Young Patterson fans will be thrilled to jump into this new adventure."—VOYA

RAVES FOR THE PAGETURNERS!

"Fights and flights are non-stop in Maximum Ride. The writing is visual and cinematic--things that kids expect from their video games, TV cartoon shows and action movies."
—USA Today

"James Patterson is really getting this teen science-fiction genre down. The author of the MAXIMUM RIDE series, about bird children, is at it again with THE DANGEROUS DAYS OF DANIEL X, with some writing assistance from Michael Ledwidge. They could not have done better than Milo Ventimiglia as the narrator of this short novel about an alien boy, Daniel, who lives on Earth and hunts evil extraterrestrials who want to enslave the population and drain its resources. Clearly, kids will love this amazing alien gifted with mysterious powers."—-AudioFile Magazine on The Dangerous Days of Daniel X