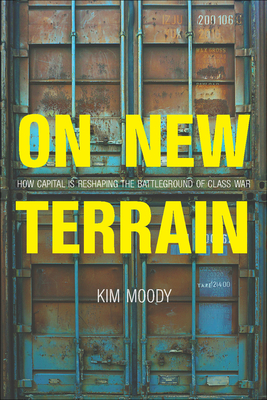 "A detailed and provocative study of how capital has changed since the 1980s and its effects on the working class and political parties in the USA." --Scottish Left Review

On New Terrain challenges conventional wisdom about a disappearing working class and the inevitability of a two-party political structure as the only framework for struggle. Through in-depth study of the economic and political shifts at the top of society, Moody shows how recent developments in capitalist production impact the working class and its power to resist the status quo. He argues that this transformed industrial terrain offers new possibilities for organization in the workplace and opens doors for grassroots, independent political action strengthened by reemerging labor and social movements.

From the logistics revolution to the unprecedented concentration of business and wealth in the hands of the one percent, On New Terrain examines the impact of the current economic terrain on the working class in the United States. Looking beyond the clich's of precarity and the gig economy, Moody shows that the working class and its own self-activity are essential in the global battle against austerity.

" A] masterful and much-needed book." --Solidarity

"Immediately shakes the reader by offering a hard hitting, concrete and sober analysis of the transformation of both the capitalist and working classes of the USA." --Bill Fletcher, Jr., coauthor of Solidarity Divided

"He explodes myths about the gig economy and the potential to transform the Democratic Party. Readers will put the book down convinced that there is a way for workers to win." --LaborNotes

Kim Moody was a founder of Labor Notes and author of several books on the U.S. labor movement, including In Solidarity: Essays on Working-Class Organization in the United States (Haymarket Books, 2014) and U.S. Labor in Trouble and Transition (Verso, 2007). He has a PhD from the University of Nottingham.