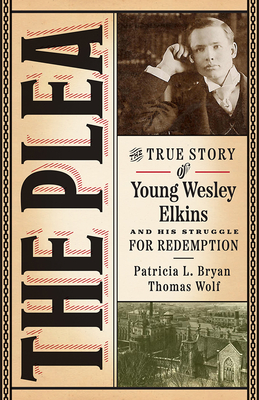 On a moonlit night in 1889, Iowa farmer John Elkins and his young wife, Hattie, were brutally murdered in their bed. Eight days later, their son, eleven-year-old Wesley Elkins, was arrested and charged with murder. The community reeled with shock by both the gruesome details of the homicides and the knowledge of the accused perpetrator—a small, quiet boy weighing just 75 pounds.

Accessible and fast-moving, The Plea delivers a complete, complex, and nuanced narrative of this horrific crime, while shedding light on the legal, social, and political environment of Iowa and the country in the late 1800s and early 1900s.

Patricia L. Bryan is coauthor of Midnight Assassin: A Murder in America’s Heartland (Iowa, 2007) and coeditor of Her America: “A Jury of Her Peers” and Other Stories by Susan Glaspell  (Iowa, 2010). She lives in Chapel Hill, North Carolina.

Thomas Wolf is coauthor of Midnight Assassin: A Murder in America’s Heartland (Iowa, 2007), and author of The Called Shot: Babe Ruth, the Chicago Cubs, and the Unforgettable Major League Baseball Season of 1932. He lives in Chapel Hill, North Carolina.

“The Plea is not just an impeccable piece of historical scholarship, but a gripping work of narrative nonfiction. Devoid of any taint of sensationalism, the book vividly reconstructs the fascinating, long-forgotten case of an eleven-year-old committing parricide, the boy’s long struggle to rehabilitate himself, and his ultimate redemption. An immensely readable and thought-provoking book—one with particular relevance in our own age of increasing juvenile homicides—it will captivate both American history buffs and fans of true crime.”—Harold Schechter, author, Manic: The Bath School Disaster and the Birth of the Modern Mass Killer

“Bryan and Wolf are not only superior scholars but also superior storytellers of the highest order. Meticulously researched, The Plea grips and surprises start to finish—revealing layers of justice and injustices, both personal and political and more. True crime aficionados will be enthralled.”—Art Taylor, Edgar Award–winning author, The Boy Detective and the Summer of ’74 and Other Tales of Suspense

“Thanks to their scrupulous research, Patricia Bryan and Thomas Wolf offer a fascinating, richly detailed, cinematic account of the life-sentence conviction of eleven-year-old Wesley Elkins for first-degree murder, his struggle for pardon or parole, and his life after release from prison. Thanks to the rich context they provide, readers will learn about many other significant issues in Iowa history, including the history of the state penitentiary in Anamosa, Iowa, and the evolution of penal practices, legal and social attitudes regarding child offenders, and even the broader social and political history of Iowa in the late nineteenth and early twentieth centuries.”—Marvin Bergman, former editor, The Annals of Iowa