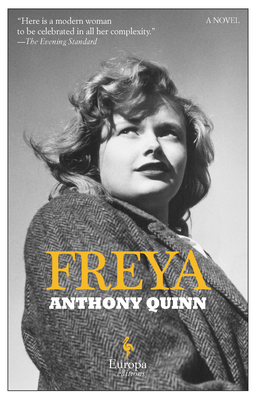 Set immediately after the end of WWII, Freya explores the lives and friendship of two british females at a time where gender roles were changing in England.

It begins on May 8th, 1945. The streets of London are alive with VE-Day celebrations. In the crowd, twenty-year-old Freya Wyley meets eighteen-year-old Nancy Holdaway. Freya's acerbic wit and free-wheeling politics complement Nancy's gentle, less self-confident nature, and what begins on that eventful day in history is the story of a devoted and competitive friendship that spans two decades.

This heralded novel follows the irrepressible lives of these young women. As Freya chooses journalism and Nancy realizes her ambitions as a novelist, their friendship explores the nuances of sexual, emotional and professional rivalries. They are not immune to the sting of betrayal and the tenderness of reconciliation.

Beneath the relentless thrum of changing times are the eternal battles fought by women in pursuit of independence and the search for love. Stretching from the war haunted halls of Oxford and the Nuremburg trials to the cultural transformations of the early 1960s, Freya presents the portraits of extraordinary women taking arms against a sea of political and personal tumult. Anthony Quinn has created an immersive story of female friendship and the self-discoveries that reveal the mysteries of the human heart.

Anthony Quinn is a British film critic and the author of four previous books including The Streets, short-listed for the 2013 Walter Scott Prize, and Curtain Call, a bestseller and pick for the Waterstones Book Club.

"Fantastic [...] [A] testament to women who fought for what they wanted in a time of little personal and professional autonomy. Clever dialogue [...] wonderfully captures the personalities, strengths, and weaknesses of major and minor characters alike."
—Publishers Weekly

"[A] fascinating, luminous story of a decades-long friendship between two women, interrogating gender roles and expectations with a masterly human touch."
—Entertainment Weekly

"This fall’s great historical epic may be an import."
—New York

“[A] double bildungsroman set against a background of political and cultural upheavals.”
—The New Yorker

“With this three-dimensional portrait of his headstrong heroine, whose hard-gloss shell conceals a hard-fought vulnerability, Quinn achieves a distinct and unusual creation: a leading lady who is likable because of her unlikability.”
—The New York Times

“Quinn’s devotion to his central character and his gift for bringing myriad scenes and situations to life make these pages a pleasure.”
—The Boston Globe

"Freya and Nancy could use another volume; here's hoping."
—The Guardian

"With its busy plot, its drinking and smoking, its crisp wit and contemporary soundtrack [...], Quinn's novel delivers evocative, high-quality entertainment that may well leave readers hoping for a sequel.”
—Kirkus Reviews (Starred Review)

"Here is a modern woman to be celebrated in all her contradictions and complexity."
—The Evening Standard

"Quinn is the literary equivalent of Houdini, a novelist who has a particular talent for absenting himself and letting his characters come to life."
—The Independent

"Quinn brings the period in question vividly to life: his research is exemplary, and his subject absorbing."
—Observer