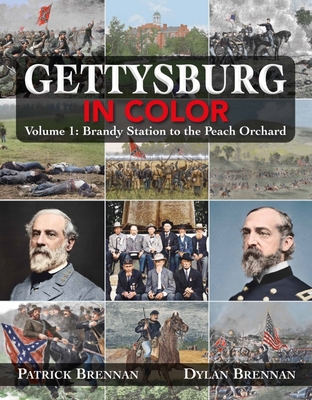 Artificial Intelligence meets Gettysburg. And it is a marvelous pairing.

Patrick Brennan, a long-time student of the Civil War, published author, and an editorial advisor for The Civil War Monitor magazine, has teamed up with his technology-astute daughter Dylan Brennan to bring the largest Civil War battle to life in the remarkable 2-volume study: Gettysburg in Color. Volume 1 covers Brandy Station to the Peach Orchard, and Volume 2 covers The Wheatfield to Falling Waters.

Rather than guess or dabble with the colors, the Brennans used an artificial intelligence-based computerized color identifier to determine the precise color of uniforms, flesh, hair, equipment, terrain, houses, and much more. The result is a monumental full-color study of the important three-day battle that brings the men, the landscape, and the action into the
21st Century.

The deep colorization of battle-related woodcuts, for example, reveals a plethora of details that have passed generations of eyes unseen. The photos of the soldiers and their officers look as if they were taken yesterday.

The use of this modern technology shines a light on one Gettysburg photographic mystery in particular. Colorizing some of the battle's "death" images revealed the presence of Union and Confederate dead that may help determine the previously unknown location of the photographs. That may also be a "first" when it comes to Civil War photography, as Pat Brennan explains: "It was long believed this was an image of seven dead Union soldiers. In fact, only five are Union men. The other two are Confederates. I am still researching the issue, but I believe this may be the only photo we have from the entire Civil War that portrays dead from both sides."

In the early 1960s, the unique presentation in Bruce Catton's The American Heritage Picture History of the Civil War spurred the interest of a generation of readers. With its sweeping prose and stunning visuals, Gettysburg in Color will have a similar impact on future generations as it takes its place as one of the most influential titles on the American Civil War.