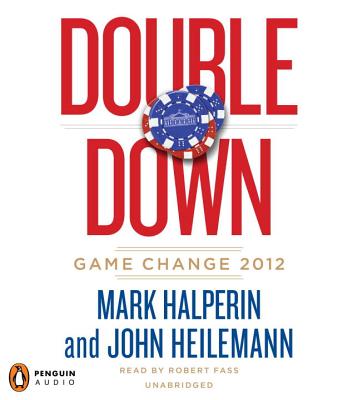 John Heilemann and Mark Halperin set the national conversation on fire with their bestselling account of the 2008 presidential election, "Game Change." In "Double Down," they apply their unparalleled access and storytelling savvy to the 2012 election, rendering an equally compelling narrative about the circuslike Republican nomination fight, the rise and fall of Mitt Romney, and the trials, tribulations, and Election Day triumph of Barack Obama.

Drawing on hundreds of interviews with the people who lived the story, Heilemann and Halperin deliver another reportorial tour de force that reads like a fast-paced novel. Character driven and dialogue rich, replete with extravagantly detailed scenes, "Double Down "offers a panoramic account of a campaign at once intensely hard fought and lastingly consequential. For Obama, the victory he achieved meant even more to him than the one he had pulled off four years earlier. In 2008, he believed, voters had bet on a hope; in 2012, they passed positive judgment on what he'd actually done, allowing him to avert a loss that would have rendered his presidency a failed, one-term accident. For the Republicans, on the other hand, 2012 not only offered a crushing verdict but an existential challenge: to rethink and reconstitute the party or face irrelevance--or even extinction. "Double Down" is the occasionally shocking, often hilarious, ultimately definitive account of an election of singular importance.

John Heilemann is the national political correspondent and columnist for "New York" magazine. An award-winning journalist and the author of "Pride Before the Fall: The Trials of Bill Gates and the End of the Microsoft Era," he is a former staff writer for "The New Yorker, Wired, " and "The Economist." He lives in Brooklyn, New York.

Mark Halperin is editor-at-large and senior political analyst for "Time" magazine. He is the author of "The Undecided Voter's Guide to the Next President "and the coauthor of "The Way to Win: Taking the White House in 2008." He has covered six presidential elections, including during his decade as the political director for ABC News. He lives in Manhattan.
My Account • Sign In • Sign Out • Register
NEW & USED BOOKS
AUTHOR EVENTS • GIFTS
Tempe
6428 South McClintock Drive
480.730.0205
[Google Map]
10am-7pm daily
Trade Counter 11am-6pm daily