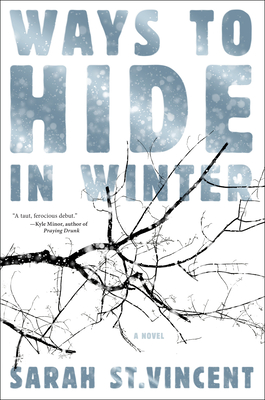 Winner of the 2019 Pinckley Prize for Debut Novel

In the wintery silences of Pennsylvania’s Blue Ridge Mountains, a woman befriends a mysterious foreigner—setting in motion this suspenseful, atmospheric, politically charged debut

After surviving a life-altering accident at twenty-two, Kathleen recuperates by retreating to a remote campground lodge in a state park, where she works flipping burgers for deer hunters and hikers—happy, she insists, to be left alone.

But when a hesitant, heavily accented stranger appears in the dead of winter—seemingly out of nowhere, kicking snow from his flimsy dress shoes—the wary Kathleen is intrigued, despite herself. He says he’s a student from Uzbekistan. To her he seems shell-shocked, clearly hiding from something that terrifies him. And as she becomes absorbed in his secrets, she’s forced to confront her own—even as her awareness of being in danger grows . . .

Steeped in the rugged beauty of the Blue Ridge Mountains, with America’s war on terror raging in the background, Sarah St.Vincent’s Ways to Hide in Winter is a powerful story about violence and redemption, betrayal and empathy . . . and how we reconcile the unforgivable in those we love.

Sarah St.Vincent grew up in rural Pennsylvania and attended Swarthmore College, Harvard University, and the University of Michigan Law School. As a human rights attorney, she has advocated for survivors of domestic violence and currently researches national security and surveillance for Human Rights Watch. Ways to Hide in Winter is her first novel. She lives in New York City.

"[An] atmospheric suspense novel....Pick up now." —O, THE OPRAH MAGAZINE

“Ways to Hide in Winter is a taut, ferocious debut. Sarah St. Vincent is the new master teller of the tale of 'our ordinary monsters.’” —Kyle Minor, author of Praying Drunk

Winner of the 2019 Pickley Prize for Debut Novel

"The author's background as a human rights attorney and advocate for victims of domestic violence serves her well as she makes subtle connections between socio-economic powerlessness and male rage... Sensitive prose conveys both compassion and outrage in this impressive debut." —*starred* KIRKUS REVIEWS

“This novel of suspense has many strengths... This is a book to keep one up late into the night, its considerable momentum pulling the reader toward its finale. An impressive, compelling first novel, with characters that will be missed after its conclusion." —SHELF AWARENESS

"Ways to Hide in Winter is an impressive, compelling first novel, with characters that will be missed after its conclusion."  —*starred* SHELF AWARENESS

"A nuanced look at tragedy and reconciliation... Ways to Hide in Winter is an atmospheric exploration of abuse, endurance, and life-altering choices." —BOOKLIST

"A tautly plotted thriller cradled by a well of emotion."  —REFINERY29

"Especially eye-opening. Ways to Hide in Winter makes it clear that you can hide for a season, but spring thaw will catch up to you eventually."   —BOOKPAGE


"A compelling mystery... The author’s experience as a human rights attorney informs the drama of the novel in a convincing way." —ARKANSAS INTERNATIONAL


"Ways to Hide in Winter is all the more impressive considering that it is author Sarah St. Vincent's debut as a novelist with a genuine flair for originality and narrative driven storytelling." —MIDWEST BOOK REVIEW

"The tightly plotted tale combines a story of regret with the war on terror."  —SOUTH FLORIDA SUN SENTINEL