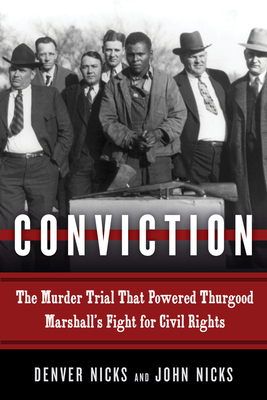 On New Year’s Eve, 1939, a horrific triple murder occurred in rural Oklahoma. Within a matter of days, investigators identified the killers: convicts on work release who had been at a craps game with one of the victims the night before. As anger at authorities grew, political pressure mounted to find a scapegoat. The governor's representative settled on a young black farmhand named W.D. Lyons. Lyons was arrested, tortured into signing a confession, and tried for the murder. The NAACP's new Legal Defense and Education Fund sent its young chief counsel, Thurgood Marshall, to take part in the trial. The organization desperately needed money, and Marshall was convinced that the Lyons case could be a fundraising boon for both the state and national organizations. He was right. The case went on to the US Supreme Court, and the NAACP raised much-needed money from the publicity. Unfortunately, not everything went according to Marshall’s plan. Filled with dramatic plot twists, Conviction is the story of the oft-forgotten case that set Marshall and the NAACP on the path that ultimately led to victory in Brown v. Board of Education and the accompanying social revolution in the United States.

Denver Nicks is a contributor to Rolling Stone, National Geographic Traveler and a former staff writer for Time magazine. He is the author of the books Private: Bradley Manning, Wikileaks, and the Biggest Exposure of Official Secrets in American History and Hot Sauce Nation: America’s Burning Obsession. John Nicks is an attorney in Tulsa, Oklahoma, specializing in oil and gas, personal injury, and civil rights law.

“This book deserves a standing ovation. It reveals the compelling story of crusading civil rights attorney Thurgood Marshall—who became the nation’s first black Supreme Court justice—and his defense of a black illiterate sharecropper accused of slaughtering three members of a white family in rural Oklahoma. Authors Denver Nicks and his attorney father, John Nicks, shine a light on unforgivable transgressions as they explain how political pressure, intimidation, coercion, and torture can result in a forced confession and the imprisonment of an innocent man.” —Michael Wallis, bestselling author of Route 66 and The Best Land Under Heaven

“By illuminating Thurgood Marshall’s earlier, leaner years, Conviction adds a much-needed dimension to the life of one of our more misunderstood civil rights heroes. The most pleasant surprise, however, is Denver and John Nicks’s well-rounded and engrossing portrayal of W.D. Lyons, a young man falsely accused of a heinous crime.” —Patrick Parr, author of The Seminarian: Martin Luther King Jr. Comes of Age