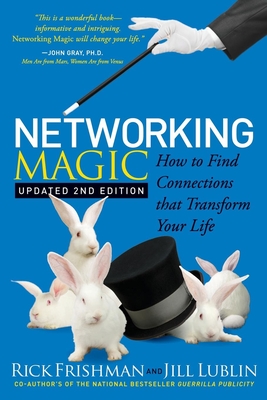 With more than 200 speaking engagements across the globe each year, master publicity strategist, Jill Lublin, consistently wows audiences across the world---with her highly entertaining, interactive keynotes, seminars, and special programs on how to be influential and gain the attention of the media. She has been featured on Tony Robbins stage as well as with T. Harv Eker and has spoken at various events with Jack Canfield, Mark Victor Hansen, and Richard Simmons.

Jill is the author of the bestselling book, "Get Noticed. . .Get Referrals" (McGraw-Hill). She is also the coauthor of two other national bestselling books, "Networking Magic" which rose to #1 on the Barnes and Noble charts for three weeks, and "Guerilla Publicity," which is regarded as the "PR Bible."

Jill hosts the TV program, "Messages of Hope," and the nationally syndicated radio show, "Do the Dream." In addition, she has created a home study system.

Over the past twenty years, she has worked with ABC, NBC, CBS, and other national media. She has also been featured in "The New York Times, Inc. Magazine, Women's Day, Fortune Small Business," and "Entrepreneur Magazine," and on ABC, NBC, and CBS, radio and TV nationwide.

Rick has also appeared on hundreds of radio shows and more than a dozen TV shows nationwide, including Oprah and Bloomberg TV. He has also been featured in the "New York Times, Wall Street Journal, Associated Press, Selling Power Magazine, New York Post," and scores of other publications.

Rick is the coauthor of thirteen books, including national bestsellers "Guerrilla Publicity, Networking Magic, Where's Your Wow?, Guerrilla Marketing for Writers, and Show Me About Book Publishing "and "250 Rules of Business."

Rick has a BFA in acting and directing and a BS in communications from Ithaca College. He is a sought-after lecturer on publishing and public relations and a member of PRSA and the National Speakers Association.