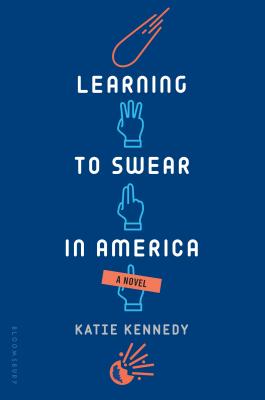 By Katie Kennedy
Email or call for price
Out of Print

Brimming with humor and one-of-a-kind characters, this end-of-the-world debut novel will grab hold of Andrew Smith and Rainbow Rowell fans.

An asteroid is hurtling toward Earth. A big, bad one. Maybe not kill-all-the-dinosaurs bad, but at least kill-everyone-in-California-and-wipe-out-Japan-with-a-tsunami bad. Yuri, a physicist prodigy from Russia, has been recruited to aid NASA as they calculate a plan to avoid disaster.

The good news is Yuri knows how to stop the asteroid--his research in antimatter will probably win him a Nobel prize if there's ever another Nobel prize awarded. But the trouble is, even though NASA asked for his help, no one there will listen to him. He's seventeen, and they've been studying physics longer than he's been alive.

Then he meets (pretty, wild, unpredictable) Dovie, who lives like a normal teenager, oblivious to the impending doom. Being with her, on the adventures she plans when he's not at NASA, Yuri catches a glimpse of what it means to save the world and live a life worth saving.

Also by Katie Kennedy:
What Goes Up

Katie Kennedy is the author of Learning to Swear in America and What Goes Up and is a college history instructor. She has a son in high school, and a daughter in college. She lives in Iowa.
www.katiekennedybooks.com

"At turns sweet, funny, moving, and suspenseful, this is a book to devour. I fell in love with the endearing, maladjusted genius Yuri, and held my breath--fault of the all-too-real and terrifying threat steadily mounting throughout the story. A fantastic read!" - S.J. Kincaid, author of THE INSIGNA TRILOGY and THE DIABOLIC

"The science Kennedy weaves throughout the story is fascinating and accessible, and Yuri and Dovie’s gentle romance is pitch-perfect. This novel is made to savor--readers will want to catch every nuance of Kennedy’s multidimensional characters." - starred review, Publishers Weekly

"The balance of wit, romance, danger, and one huge philosophical and ethical dilemma is brilliantly managed here. . . . A nail-biting climax with a cinematic aftermath and an even more nail-biting resolution round out this thoroughly entertaining sci-fi disaster, romance, action/adventure mashup." - starred review, BCCB

"Katie Kennedy is an author to put at the top of your watch-for-and-read list!" - USA Today

"An end-of-the-world romp that will prompt readers to think and to laugh." - Kirkus Reviews

"An entertaining, genre-bending mix of quirky romance and realistic sci-fi, with some thought-provoking questions about adulthood thrown in for good measure." - Booklist

"Will appeal to many types of readers. Its NASA setting and sarcastic lead echo The Martian, while its quirky, whip-smart characters and sweet romance will capture Green and Rowell fans. . . . Recommended for all collections." - VOYA