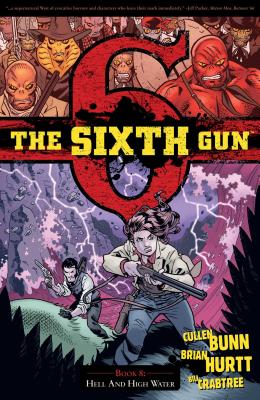 This is book number 8 in the The Sixth Gun series.

The Six—the cursed pistols that can destroy the world—have fallen into the wrong hands. Griselda the Grey Witch and her henchman Jesup Sutter now control the weapons. As they prepare to use the guns to throw open the gates of Perdition and condemn the world to darkness, they are opposed only by a ragtag group of desperate heroes. But Drake Sinclair, Becky Montcrief, and Screaming Crow have a few surprises in store for the ageless witch. As the apocalypse dawns, a vicious gunfight rages in the streets of a nameless city!