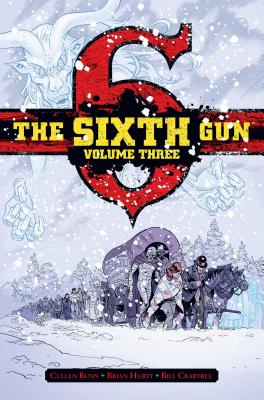 This is book number 3 in the The Sixth Gun series.

Traveling by secret railroad, Becky and Drake accompany an order of mysterious monks on a quest to bury General Hume's body on holy ground. But, when malevolent forces spurred by a sinister necromancer stage a terrifying attack on the train, Drake vanishes without a trace! Alone, Becky continues her journey to a secluded mountain fortress where she discovers how deeply her fate is entwined with that of The Sixth Gun. Meanwhile, Gord revisits a haunted mansion from his past hoping to discover a means to destroy the Six, but the ghosts he stirs have no intention of letting his quest continue.