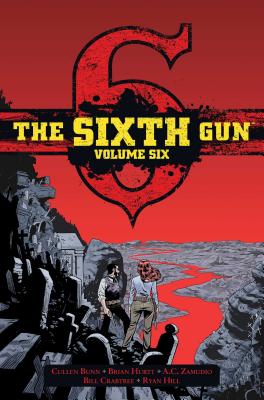 The Sixth Gun Volume Six Deluxe Edition collects issues #48-50 of the story arc “Boot Hill,” as well as the three-issue spinoff miniseries “Dust to Dust,” and the three-issue spinoff miniseries "Valley of Death." In addition to the stunning artwork of Brian Hurtt with Bill Crabtree, this collection features art from A.C. Zamudio, Cat Farris, and Tyler Crook, with Ryan Hill. This oversized deluxe collection includes an intro from titan of Fantasy Michael Moorcock, never before seen artwork, design sketches, cover galleries, an all-new, in-depth interview with creators Cullen Bunn and Brian Hurtt by writer/artist Chris Schweizer, and more, from the Eisner-nominated fantasy western epic. It is presented with a gorgeous new cover by Brian Hurtt with Bill Crabtree.