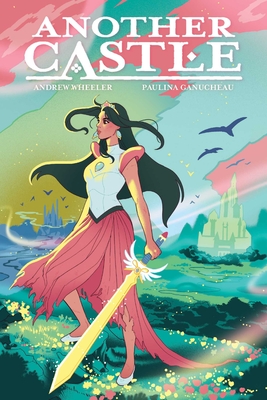 I love any story with warrior princess energy, and Another Castle is dripping with it! Princess Misty takes off on her own to overthrow an evil king. Aside from the lack of a charming prince, the story seems like the typical self-righteous-hero-saves-kingdom-from-evil-and -everyone-lives-happily-ever-after. Ah, we are so quick to make assumptions, Misty too. Things are never as straightforward as they seem. When one monarch is gone, and a new one takes their place, does anything really change or is it more of the same? When the evil king is destroyed what fills the power vacuum? Do we really need another castle?
— From Cailey's Picks (page 2)

When the mystical sword that can defeat Beldora’s long-time enemy Lord Badlug, King of Grimoire, is stolen by his witch princess of Beldora, Misty, decides to go on a mission to retrieve it. Misty knows her mission is to destroy Lord Badlug, but what happens to the country of Grimoire afterwards? As Misty learns of the lives Grimoire's citizens, like her new friends Gorga, Fogmoth and Robin, she realizes overthrowing an evil King isn't as simple as it seems.

Paulina Ganucheau is a comic artist and illustrator based wherever her computer lives. She is the creator of Lemon Bird with an original GN out in 2021 and co-creator of Zodiac Starforce published by Dark Horse Comics. Her hobbies include watching pro-wrestling, cloud photography and following cats on Instagram.

Andrew Wheeler is an award-winning comics writer and editor whose works include the Dungeons & Dragons Young Adventurer's Guides, Wonder Woman: Agent of Peace, the queer superhero series Freelance, and Shout Out, the Prism-nominated LGBTQ+ anthology for young readers. Andrew was born in Hastings, England, and now lives in Toronto with thousands of raccoons.

"Wheeler delivers a feminist fantasy adventure that overturns genre conventions at every opportunity, and his diverse cast of humans and monsters underscores underlying themes about prejudices and unfair assumptions."
— Publishers Weekly (starred review)