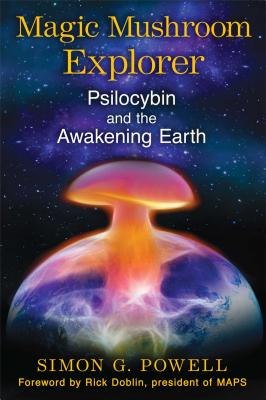 • Explores the ecopsychological effects of wild psychedelic mushrooms, including enhanced biophilia, expanded awareness, eco-shamanic encounters, and access to the ancient wisdom that binds all life on Earth

• Examines the most recent scientific studies on psilocybin in the U.S. and U.K.

• Details the author’s work to keep the use of psilocybin mushrooms legal in the U.K. and shows that an irrational rejection of scientific evidence underlies the harsh war against psychedelic states of consciousness

Psilocybin, the active ingredient found in psychedelic mushrooms, is an invaluable natural resource for spiritually revivifying the human psyche and reconnecting us to the biosphere and the vast intelligence of Nature. Interweaving the most recent scientific studies in the United States and Britain, more than 25 years of sacred mushroom exploration, and behind-the-scenes details on the political wars against psychedelics, Simon G. Powell offers a guide to safely navigating and maximizing the healing and spiritual potential of psilocybin.

Powell explores the ecopsychological effects of wild psychedelic mushrooms, including enhanced biophilia, expanded awareness, mystical visions, and eco-shamanic encounters. He reveals how the beings and otherworldly teachers common in psilocybin experiences are actually emissaries from our higher consciousness that emerge when the floodgates of perception have been opened. He shares vivid descriptions from many of his own psilocybin journeys and shows how the mushroom offers a path of return to the ancient wisdom binding all life on Earth, a wisdom conveyed through tutorial visions and higher modes of perception. Illustrating psilocybin’s healthful properties, now acknowledged by mainstream science, Powell describes his activism in the fight to keep psilocybin mushroom use legal in the U.K. and shows that an irrational rejection of scientific evidence underlies the harsh war against psychedelic states of consciousness.

Laying the groundwork for a new relationship with our biosphere, Powell shows how the Earth’s psychedelic medicines can reconnect us to the spirituality and wisdom of Nature and bring the human race back from the brink of ecological and existential disaster.

Simon G. Powell is a writer, musician, and filmmaker. He is the author of The Psilocybin Solution and the director/presenter of the film documentary Metanoia: A New Vision of Nature. He lives in London.

Rick Doblin is the president of MAPS.

“Here is the thought-provoking description of the author’s spiritual quest, his profound discoveries, and their implications for renewed research with psychedelic substances, reawakening us to the sacredness of nature and life itself. In and through the pitfalls and pinnacles of his journey is the transformation of a curious and courageous young man into a mature modern prophet and social critic. Fascinating read!”
— William A. Richards, Ph.D., Johns Hopkins School of Medicine

Simon’s book discusses all these highly charged ideas in a charming, easily understood, humorous, and utterly engaging manner that will resonate with experienced psilocybin explorers and that may just open the eyes of those who are not (yet) experienced to the possibility that nature is richly blessed with unimagined realms of intelligence, mystery, and complexity. With this book, his third, Simon has knocked it right out of the park (or perhaps right into the park, since parks seem to be the frequent home of his little fungal friends).”
— Dennis McKenna, Ph.D., ethnopharmacologist, cofounder of the Heffter Research Institute, and author

“Simon G. Powell, a credible psychonaut, has written a book that should be welcomed as our overpopulated species attempts to transition to sane drug policies and respect for native wisdom, integration with nature, and, ultimately, planetary maturity and ecological stability.”
— Dorion Sagan, American science writer, essayist, and theorist

“The author informs, muses, and amuses as he chronicles his psilocybin explorations and insights into natural intelligence. He writes in joyfully plain English, tells compelling stories, and gets excited by all of life. Definitely outside the box.”
— Jeremy Narby, author of The Cosmic Serpent

“Simon G. Powell’s most profound insight is that nature is intelligent, not in the way that we think of intelligence as confined to the human mind, but that intelligence is an intrinsic property of the whole of nature. He calls for a new science of ‘psilocybinetics’ that views life anew under the ‘perceptual lens’ afforded by the mushroom. It is an interesting and provocative read!”
— David E. Nichols, Ph. D., president and cofounder of the Heffter Research Institute