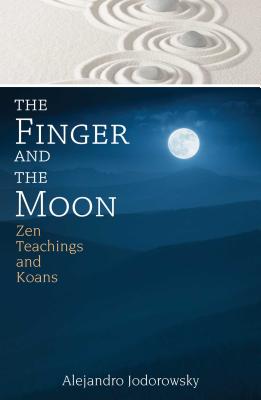 This book is both simple and elegant, which may come as a surprise to those who only know Alejandro Jodorowsky through his films, with their highly surrealistic and unconventional narratives, or even his wildly imaginative science fiction comics or magic-realist novel--all of the above being simultaneously esoteric and zany in equal parts. But at the center of this fevered imagination, is a surprisingly sober authority on Zen Buddhist philosophy. His interpretations of the traditional Japanese Zen koans, stories, and haiku related in the book are deeply resonant and legitimately altered the way I look at myself and the world around me. It's clear within the first few pages of this book that he is a man who understands life and art, and the only prerequisite required to being moved by it is simply living, breathing, and having a little bit of wonder as to what that's all about. — From Salvatore's Picks

• Each story or koan is accompanied by the author’s lucid and penetrating commentary, blending the same burlesque slapstick and sublime insight that characterize his films

Before he became the film maker and graphic novel author known throughout the world today, Alejandro Jodorowsky studied with Zen master Ejo Takata in Mexico City. In The Finger and the Moon, Jodorowsky recounts how he became Takata’s student and offers his interpretations of the teaching tales, initiatory stories, koans, and enigmatic haikus he learned at the feet of his great and humble teacher. Blending the same burlesque slapstick and sublime insight that characterize his films such as El Topo and The Holy Mountain, each story is accompanied by the author’s lucid and penetrating commentary, as well as insights from ancient Zen teachers. Yet their most significant gift to the reader is the sudden shock of realization they impart that can lead to spiritual awakening.

Jodorowsky notes that most people are incapable of self-realization because of their fear of the void within, an emptiness they seek to fill with noise and chatter. He shows that Zen teachings can be compared to a finger pointing at the moon, directing you to awaken to your true nature--the Buddha within. The danger lies in mistaking the pointing finger for the moon, mistaking the words for the essential enlightenment, which can only be grasped once words have been surpassed. Unlike most tales, these stories are intended to evoke silent illumination--as true awakening and self-realization cannot occur until the mind has been stilled.

Alejandro Jodorowsky is a playwright, filmmaker, composer, mime, psychotherapist, and author of many books on spirituality and tarot, and over thirty comic books and graphic novels. He has directed several films, including The Rainbow Thief and the cult classics El Topo and The Holy Mountain. He lives in France. In 2019, Alejandro Jodorowsky was cited as one of the "100 Most Spiritually Influential Living People in the World" according to Watkins Mind Body Spirit magazine.

“No one alive today, anywhere, has been able to demonstrate the sheer possibilities of artistic invention--and in so many disciplines--as powerfully as Alejandro Jodorowsky.”
— NPR Books

“Alejandro Jodorowsky is a demiurge and an interpreter of our stories, always exploring further the understanding of both the beauty and complexity revealed by humankind.”
— Diana Widmaier Picasso, art historian

“Jodorowsky is a brilliant, wise, gentle, and cunning wizard with tremendous depth of imagination and crystalline insight into the human condition.”
— Daniel Pinchbeck, author of Breaking Open the Head

“Alejandro Jodorowsky seamlessly and effortlessly weaves together the worlds of art, the confined social structure, and things we can only touch with an open heart and mind.”
— Erykah Badu, artist and alchemist

“One of the most inspiring artists of our time. . . . A prophet of creativity.”
— Kanye West, recording artist

“The Dance of Reality begs to be read as a culminating work. . . .”
— Los Angeles Times

“The Dance of Reality [film] is a trippy but big-hearted reimagining of the young Alejandro’s unhappy childhood in a Chilean town. . . .”
— New York Times Magazine

“Manual of Psychomagic is great . . . like a cookbook of very useful recipes that can help us to understand our life and the universe we live in.”
— Marina AbramoviÄ?, performance artist

“His films El Topo and The Holy Mountain were trippy, perverse, and blasphemous.”
— Wall Street Journal