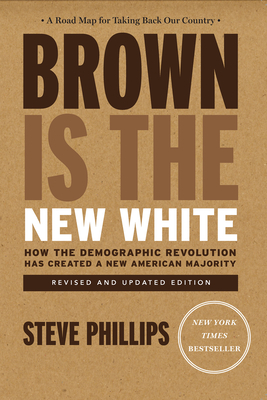 The New York Times and Washington Post bestseller that sparked a national conversation about America's new progressive, multiracial majority, updated to include data from the 2016 election With a new preface and afterword by the author

When it first appeared in the lead-up to the 2016 election, Brown Is the New White helped spark a national discussion of race and electoral politics and the often-misdirected spending priorities of the Democratic party. This slim yet jam-packed call to action (Booklist) contained a detailed, data-driven illustration of the rapidly increasing number of racial minorities in America (NBC News) and their significance in shaping our political future.

Completely revised and updated to address the aftermath of the 2016 election, this first paperback edition of Brown Is the New White doubles down on its original insights. Attacking the myth of the white swing voter head-on, Steve Phillips, named one of America's Top 50 Influencers by Campaigns & Elections, closely examines 2016 election results against a long backdrop of shifts in the electoral map over the past generation--arguing that, now more than ever, hope for a more progressive political future lies not with increased advertising to middle-of-the-road white voters, but with cultivating America's growing, diverse majority.

Emerging as a respected and clear-headed commentator on American politics at a time of pessimism and confusion among Democrats, Phillips offers a stirring answer to anyone who thinks the immediate future holds nothing but Trump and Republican majorities.

Steve Phillips is a New York Times bestselling author, columnist, and leading national political thought leader. He is the author of the New York Times and Washington Post bestselling Brown Is the New White: How the Demographic Revolution Has Created a New American Majority as well as How We Win the Civil War (both from The New Press); he is also the founder of Democracy in Color, a political media organization dedicated to race, politics, and the multicultural progressive New American Majority. Phillips is the host of "Democracy in Color with Steve Phillips," a color-conscious podcast on politics. He is regular columnist for The Nation and The Guardian. He lives in San Francisco.