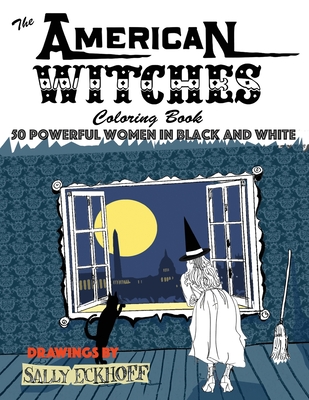 What's a witch? Look for her silhouette-a woman in an old-fashioned black bombazine

the tip of her chin. She's not undead; she's curiously eternal. And yet a witch is a real

person-just not one that everybody is brave enough to meet. Witches are reviled, feared, attacked.

But witches are admired, too, and in this book we give them all the love they've been missing. Every

day, a new witch appears in the nighttime sky. Why? Because we need her. With witch applications

up, the approval process is as gnarly as ever. So we need a way let the witches show their stuff.

Why witches? There are times and places where only something catalytic will get the job done.

Witches have that special ability to make ordinary things-brooms, for instance-do extraordinary

things, in order to get to an ultimate objective, which is to mess someone up. There's nothing you can

do to stop a witch, and when you get onto her list, you're gonna feel it.

How did witches get so big in contemporary culture? It took a while. All those love songs, the ones

a witch," finally found its own reaction. If that's the way they want it, then we're all witches. The line

To give American Witches their proper due, we found criteria that emphasize new forces in our

society. An American Witch is, for our purposes, someone who's alive right now. She has to be able

to catalyze her resources into powers-a talent that can surprise even the witch herself. Lastly, she has

to be willing to use those powers, and damn the consequences. She can't be in it for the money.

New witches are swooping over our horizons every day. Who did we miss? Send us your Witch

organization, Fair Fight (https: //fairfight.com) because witches, well, we have each other's backs.

And because voting is the most important thing a person can do, witch or not.

Now find your broom and get ready to ride.