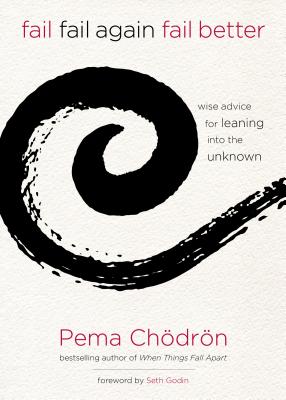 By Pema Chödrön, Seth Godin (Foreword by)
$14.95
On Our Shelves Now

As the subtitle tells us, Pema Chodron's newest book is "wise advice for leaning into the unknown." For example, being aware of what you are saying to yourself, being aware of the breath going in and out, and staying with the feeling - in this case, when you feel that you have failed or made a mistake. Then rephrasing self critical talk so it is more gentle and positive. Pema Chodron is an American-born Buddhist nun whose life experiences have led her to the place of being able to share "wise advice" in a simple and straightforward manner. Tami Simon from Sounds True interviewed Ani Pema for this book and the accompanying CD, which includes a second interview. There is inspiration in these words.

When her granddaughter was accepted to Naropa University, the celebrated author Pema Chödrön promised that she’d speak at the commencement ceremony. Fail, Fail Again, Fail Better contains the wisdom shared on that day. "What do we do when life doesn’t go the way we hoped?" begins Pema "We say, ‘I’m a failure." But what if failing wasn’t just "okay," but the most direct way to becoming a more complete, loving, and fulfilled human being? Through the insights of her own teachers and life journey, Pema Chödrön offers us her heartfelt advice on how to face the unknown—in ourselves and in the world—and how our missteps can open our eyes to see new possibilities and purpose. For Pema’s millions of readers, prospective graduates, or anyone at a life crossroads, this gem of clarity and reassurance is sure to find a welcome place in many a kitchen, office, and backpack.

Ani Pema Chödrön was born Deirdre Blomfield-Brown in 1936, in New York City. She attended Miss Porter's School in Connecticut and graduated from the University of California at Berkeley. She taught as an elementary school teacher for many years in both New Mexico and California. Pema has two children and three grandchildren.

While in her mid-thirties, Ani Pema traveled to the French Alps and encountered Lama Chime Rinpoche, with whom she studied for several years. She became a novice nun in 1974 while studying with Lama Chime in London. His Holiness the Sixteenth Karmapa came to Scotland at that time, and Ani Pema received her ordination from him.

Pema first met her root guru, Chögyam Trungpa Rinpoche, in 1972. Lama Chime encouraged her to work with Rinpoche, and it was with him that she ultimately made her most profound connection, studying with him from 1974 until his death in 1987. At the request of the Sixteenth Karmapa, she received the full bikshuni ordination in the Chinese lineage of Buddhism in 1981 in Hong Kong.

Ani Pema served as the director of Karma Dzong in Boulder, Colorado until moving in 1984 to rural Cape Breton, Nova Scotia to be the director of Gampo Abbey. Chögyam Trungpa Rinpoche gave her explicit instructions on establishing this monastery for western monks and nuns.

Ani Pema currently teaches in the United States and Canada and plans for an increased amount of time in solitary retreat under the guidance of Venerable Dzigar Kongtrul Rinpoche. She is also a student of Sakyong Mipham Rinpoche, the oldest son and lineage holder of Chögyam Trungpa Rinpoche.

Ani Pema is interested in helping establish Tibetan Buddhist monasticism in the West, as well as continuing her work with western Buddhists of all traditions, sharing ideas and teachings. Her non-profit, The Pema Chödrön Foundation, was set up to assist in this purpose.

She has written several books: The Wisdom of No Escape, Start Where You Are, When Things Fall Apart, The Places that Scare You, No Time To Lose, Practicing Peace in Times of War, How to Meditate, and Living Beautifully. All are available from Shambhala Publications and Sounds True.

Seth Godin is the author of The Icarus Deception, Linchpin, Tribes, Purple Cow, The Dip, and many other industry-changing books on marketing, business, creativity, and meaningful work. He is one of the most widelyread blog writers in the world (over a million followers and counting).

For more information, search for "Seth" or visit sethgodin.typepad.com .

“Chodron is one of the rock stars of contemporary spiritual life. Born Deirdre Blomfield-Brown in New York City, the author converted to Buddhism in her thirties, became a disciple of Chögyam Trungpa, and ultimately the leader of the Boulder Shambhala Center in Colorado. She is also the author of such works as The Wisdom of No Escape and Start From Where You Are, which brought her a wide, attentive audience. This latest book arose from a request to speak at her granddaughter’s commencement. Chodron presents wisdom inherent in allowing oneself to fail. The text has been enlarged by brushstroke-like artwork, a follow-up interview with Sounds True founder and publisher Tami Simon, and an introduction by entrepreneur Seth Godin. VERDICT This brief text has all of the pleasures of a stocking-stuffer but is suitable to other seasons as well and by no means limited in its appeal to followers of Buddhism or recent graduates.” —Library Journal

“For Boulder, Colo.–based Naropa University’s 2014 commencement ceremony, Chödrön (When Things Fall Apart) told new graduates that "knowing how to fail well" is an essential—and neglected—life skill. Chödrön, an American Buddhist nun, popular author, and student of the late Chögyam Trungpa, urges her audience to hold the 'rawness of vulnerability in [your] heart' rather than blaming self or others. This volume pairs a transcript of the very short speech, accompanied by abstract black and white drawings, with a more substantive interview with her publisher, in which Chödrön talks candidly about her personal experiences with failure and explores self-hatred, human goodness, and fear. She provides insightful suggestions for how to move forward into life despite crushing failure, how to turn regret into empathy and compassion, and how to cope gracefully with a failing body. This small book, an appropriate gift for recent graduates or anyone facing a challenging transition, also contains sustenance for loyal Chödrön fans, and introduces new readers to her gentle wisdom for living in a 'world where there are a lot of things that aren’t fixable.” —Publishers Weekly

“Pema Chödrön promised to speak at her granddaughter’s graduation from Naropa University. When asked what her speech would be about, she declined to answer because she had decided to speak to those enthusiastic young graduates about failure. True to her compassionate nature, it turned out to be some of the best advice they would ever receive. She described failing as "getting good at holding the rawness of vulnerability in your heart." She encouraged them to embrace the discomfort of failure rather than blaming others or themselves. She recounted her own painful struggle with turning failure into strength. She suggested that failure is just a shift in the direction of our lives. The last section of the book is a follow-up interview with her which was conducted by Founder & CEO of Sounds True, Tami Simon. During Simon’s interview she had the chance to discuss the deeper layers of the ideas she had offered to those young people. Chödrön has a talent for connecting mind to mind through the heart. This book is another beautiful example of her skill.” —Anna Jedrziewski, Retailing Insight