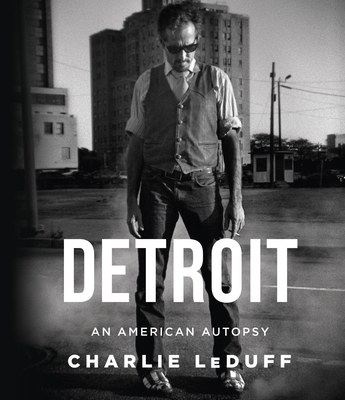 By Charlie LeDuff
$29.95
Not Available In-Store - Usually Ships from Warehouse in 1-5 Days

In the heart of America, a metropolis is quietly destroying itself. Detroit, once the richest city in the nation, is now its poorest. Once the vanguard of America’s machine age—mass production, automobiles, and blue-collar jobs—Detroit is now America’s capital for unemployment, illiteracy, foreclosure, and dropouts.

With the steel-eyed reportage that has become his trademark and the righteous indignation that only a native son can possess, journalist Charlie LeDuff sets out to uncover what has brought low this once-vibrant city, his city. In doing so, he uncovers the deeply human drama of a city filled with some of the strongest—and strangest—people our country has to offer.

CHARLIE LEDUFF was a staff writer at The New York Times, a reporter at The Detroit News, and is now a television journalist for Detroit’s FOX2 News. He contributed to a Pulitzer Prize-winning New York Times series and has received a Meyer Berger Award for distinguished writing about New York City. He is the author of US Guys and Work and Other Sins.

“Eric Martin hits all the right notes. . . . The author’s edgy tone is tough and uncompromising, befitting the harsh realities facing those who remain in the troubled city. Martin’s narration mirrors LeDuff’s writing as he voices the poverty, corruption, and crime of the city as well as the brash and irreverent personality of the author himself.”
—AudioFile [Earphones Award Winner]

“Martiṉs narration is exactly right, reflecting all of LeDuff’s sincerity, outrage, and despair. . . . This masterly snapshot of a city in ruins translates superbly to the spoken word.”
—Library Journal [starred review]

“A powerfully narrated testimony to the American spirit and its challenges.”
—California Bookwatch

“LeDuff explores it all with literary grace and justified indignation about what’s befallen a place he loves.”
—Minneapolis Star Tribune