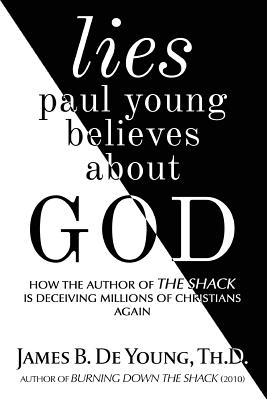 By James B. de Young
$15.99
Special Order - Subject to Availability

For years, there has been uncertainty regarding Paul Young's The Shack. Some have suspected heresy but have been unable to pin down exactly what Paul Young believed. James De Young, Th.D., who has known Paul Young for a couple decades, wrote Burning Down the Shack to expose Christians to the fact that Paul Young espoused universalism.

Now "the cat is out of the bag." In his newest book, Lies We Believe about God, Young blatantly confesses adherence to universal reconciliation, as well as twenty-seven other beliefs that are heretical. Here are some of Paul Young's unbiblical claims:

Drawing upon his life-long teaching of the Bible and the original languages, James De Young appeals to the Bible to expose Paul Young as a heretic. In appendices, he also furnishes proof that Paul Young violates the Nicene Creed and the beliefs of the early church father Athanasius.

Finally, we have a book written by one who is both personally and academically qualified to expose the true nature of Young's writings. De Young will empower you to:

James De Young is now Senior Professor of New Testament at Western Seminary, Portland, Oregon, and lives on a small farm in Damascus, Oregon, where he has served as a city councilor. He and his wife, Patricia Ann, have four children and twelve grandchildren.