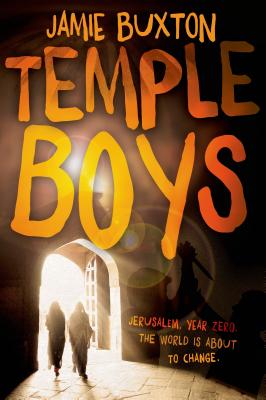 By Jamie Buxton
Email or call for price
Out of Print

Flea belongs to a gang of teenage vagrants living in the shadow of the Temple, with no family and no home, living on their wits and what they can beg or steal. The city is crowded with visitors for Passover and governed by an uneasy alliance between the Temple priests and the occupying Roman army, bringing talk of miracles and revolution. Flea and his comrades latch onto the newcomer in the hope that he'll offer them a secure home. As events accumulate and powerful forces gather around the Magician, Flea notices rumblings of discontent among his followers, and finds himself torn between one of them—the protective Jude, who employs Flea to run errands—and a brutal Roman spy determined to uncover the Magician's plans.

Is the Magician the savior he claims to be, or a fraud? Does Flea hold the fate of the Magician—and possibly the world—in his hands, as he begins to believe? Temple Boys vividly conjures up ancient Jerusalem and the Biblical era and boldly re-imagines the western world's most famous story from the point of view of a teenage boy.

Jamie Buxton studied English at Cambridge University and has been writing all his adult life. He has taught in the United States, traveled extensively in the Middle East, and now splits his time between London, rural Devonshire, his car, local cafes that are sick of the sight of him, and libraries when he can find one. He is married with one child, plus a dog, cats, and all their fleas.

“[A] gritty, thought-provoking, and daring novel that offers a bold, humanizing perspective on a story often overwhelmed by its symbolic power.” —Booklist, starred review

“Written in a time period not often covered in teen fiction, Temple Boys moves at a quick and adventurous pace that will have readers cheering for Flea and hoping that he endures.” —VOYA

“Buxton writes a fast-paced action story with a modern voice and a vivid, ancient setting . . . a solid, unique reworking of an old tale.” —School Library Journal

“Vividly reimagined through the eyes of an adolescent with no agenda but his own survival... Buxton's picture of Jerusalem as a roiling cauldron of faith, superstition, rumor, and uneasy truce between Temple and Roman authority is convincing.” —BCCB