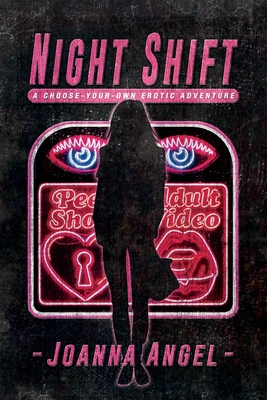 Joanna Angel is an award-winning adult film star, director, producer, best selling author, and entrepreneur. She was the owner and founder of the venerated adult studio BurningAngel Entertainment from 2002 to 2019, with Pacific Standard magazine calling her "one of the most powerful feminist icons in the adult industry." She's stormed mainstream media outlets with a mission to defy all stereotypes of sex workers by being a strong, educated, insightful, and powerful woman in adult film. While an exotic dancer, she toured and performed at strip clubs around the world. She’s been featured in the New York Times, Forbes Magazine, LA Weekly, and on Vice TV and CNBC, to name a few. She was inducted into AVN's Hall of Fame in 2016, the XRCO Hall of Fame in 2017, and in 2018 was crowned a legendary triple threat by NightMoves magazine for her accolades as a director, performer, and exotic dancer.

"Like Joanna herself, Night Shift is fun, sexy, and full of surprises! No matter which adventure you choose, Joanna Angel is guaranteed to take you on an amazing - and sexy - ride!" --Mike Tully, co-host, The Jason Ellis Show
— Reviews

"This interactive story is a fun way to enjoy a smorgasbord of sex scenes." --Publishers Weekly
— Reviews

"Night Shift takes a "come one, come all" approach to erotica. It includes diverse body types, couplings, fetishes, and toys: nothing is off limits. Angel...takes a wonderfully open-minded approach to her material. Drawing from a broad palette of preferences, she has created a book that is truly special and unusual. Night Shift is candy sweet and easy to enjoy erotica in a lively, explorable format. [Five Stars]" --Foreword Reviews
— Reviews

"Joanna Angel should be applauded for her ability to create such a strong work that also manages to be the perfect fun and sexy read." --The Nerdy Girl Express
— Reviews

"I loved Night Shift. I have dissected it and read every single-story arc within it and can honestly say it's my favourite erotica I've read for a long time." --Candysnatch Reviews
— Reviews

"Entertaining with well rounded (women) characters and a trope that will have you reading and re-reading for hours." --Eliza David Writes
— Reviews

"A Choose Your Own Adventure story like Bandersnatch, but with 'sexploration.' Adult film actress, director, and author Joanna Angel dreamed up this witty tale..." —Cosmopolitan
— Cosmopolitan