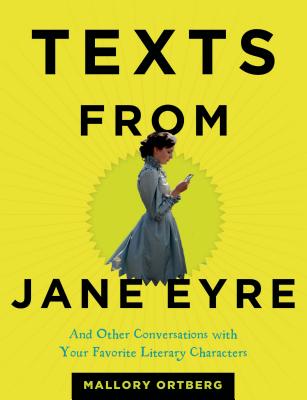 By Mallory Ortberg
$26.00
Not Available In-Store - Usually Ships from Warehouse in 1-5 Days

The moment I saw this upon the cart of books we were to shelve that night, I knew I must read it aloud (in various character voices) to all my fellow booksellers on shift that evening. For I am a nothing if not a massive fan of modern classics being put into modern situations. Texts from Jane Eyre showcases a delightfully hilarious understanding of famous fictional characters in the simple format of text messaging. From Sherlock and Watson's argument over a certain habit of Sherlock's to Daisy always texting while driving. For any lover of literature, or for anyone looking for even shorter versions of all modern classics, this book will leave you keeled over from laughter.

“If this book were liquor, I'd buy shots for the whole bar. If it were a YouTube video, I'd be walking around showing it to strangers on my phone. But it's a book, so I'm going to buy multiple copies and hand them out to everyone I know who loves to read. The combination of irreverent, modern text-speak and classic literary characters makes for one hilarious imaginary conversation after another. The exchange between the husband and wife from Charlotte Perkins Gilman's The Yellow Wallpaper had me snort-laughing! Every English major, every bookseller, every reader of any sort needs this book!”
— Mary Laura Philpott, Parnassus Books, Nashville, TN

Mallory Ortberg, the co-creator of the cult-favorite website The Toast, presents this whimsical collection of hysterical text conversations from your favorite literary characters. Everyone knows that if Scarlett O'Hara had an unlimited text-and-data plan, she'd constantly try to tempt Ashley away from Melanie with suggestive messages. If Mr. Rochester could text Jane Eyre, his ardent missives would obviously be in all-caps. And Daisy Buchanan would not only text while driving, she'd text you to pick her up after she totaled her car. Based on the popular web-feature, Texts from Jane Eyre is a witty, irreverent mashup that brings the characters from your favorite books into the twenty-first century.

Mallory Ortberg is Slate's "Dear Prudence." She has written for The New Yorker, New York magazine, O, The Oprah Magazine, and The Atlantic. She is the cocreator of The Toast, a general-interest website geared toward women. Mallory is the author of Texts from Jane Eyre and The Merry Spinster.

“In Texts from Jane Eyre Mallory Ortberg hilariously proves that she understands fictional characters better than they understand themselves. She makes me laugh like no one else.” —Rainbow Rowell, bestselling author of Eleanor & Park and Fangirl

“Dear Mallory Ortberg's Publisher: Please send me 27 cases of Texts from Jane Eyre, because I ate it like it was candy coated in crack cocaine, it's the best, and I need to give it to everyone.” —Elizabeth Gilbert, bestselling author of Eat, Pray, Love and The Signature of All Things

“Witty and literate. Smart-ass humor with an emphasis on smart. I'm not sure who I'm more jealous of: Mallory Ortberg for her comic brilliance, or whoever got to sit next to her in high school English.” —Adam Bertocci, author of Two Gentlemen of Lebowski

“Mallory Ortberg is actually, literally the funniest person on the internet. It turns out she has also read everything. This is the smartest, most highbrow, most sophisticated literary book that will ever make you pee yourself in public.” —Rachel Fershleiser, co-editor of Not Quite What I Was Planning: Six-Word Memoirs by Writers Famous and Obscure

“[A] splendid and wry work of humor writing...Texts from Jane Eyre is to literary culture what The Daily Show is to politics: both use satire to expose the contradictions and absurdity enabling powerful figures.” —Los Angeles Review of Books

“What if the greatest characters in literary history all carried around smartphones and typed out messages to each other?...[A] highbrow yet subversive sensibility” —NPR Morning Edition

“These informal, off the cuff missives are true to each character's voice, as Ortberg understands them deeply--and the result is hilarious...Don't resist. Just give in to this crazy, wonderful book.” —Bustle.com

“Humorist Ortberg offers a side-splitting take on famous literary characters from Gilgamesh to Hermione Granger by peeking into their imagined text messages...Ortberg charmingly captures, in short, palatable bytes, what is most memorable about famous books and their indelible characters.” —Publishers Weekly

“Ortberg finds a way of lampooning the ridiculous characters of the past (both fictional and non fiction) thanks to her endless knowledge of and passion for western literature and history and her sharp humor.” —BUST Magazine

“[Texts from Jane Eyre] is a treasure trove of weird literary jokes which, to be honest, are our favorite kind.” —Brooklyn Magazine

“Each [text conversation] brings a contemporary sensibility to timeless publications of yore. Be prepared to LOL--literally.” —Los Angeles Magazine

“Anyone who is really into the classics and also has a sense of humor will appreciate [Texts from Jane Eyre]. It will make a great holiday present.” —BookRiot's "In the Mailbag"

“[T]his book is a literary aficionado's dream!...This compendium of witty and absolutely charming text messages from and to characters that we all know...had me laughing out loud and rereading over and over again.” —Thereviewbroads.com

“[A] super-funny book that envisions what text conversations would be like with your favorite literary legends...I recommend you pick up Texts from Jane Eyre for any book lover with a sense of humor (and maybe a cell phone.)” —Zulkey.com

“Just in time to complete your Christmas shopping...Read it and send your AP English teacher a thank-you note. ” —Jezebel.com

“This makes me laugh...Cliff's Notes seem so wordy now, don't they?” —Houston Chronicle