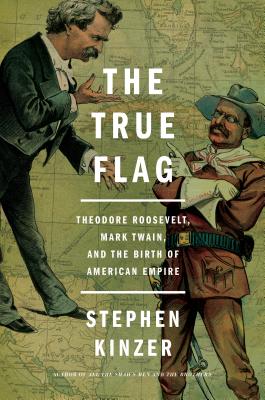 By Stephen Kinzer
Email or call for price
Out of Print

The bestselling author of Overthrow and The Brothers brings to life the forgotten political debate that set America’s interventionist course in the world for the twentieth century and beyond.

How should the United States act in the world? Americans cannot decide. Sometimes we burn with righteous anger, launching foreign wars and deposing governments. Then we retreat—until the cycle begins again.

No matter how often we debate this question, none of what we say is original. Every argument is a pale shadow of the first and greatest debate, which erupted more than a century ago. Its themes resurface every time Americans argue whether to intervene in a foreign country.

Revealing a piece of forgotten history, Stephen Kinzer transports us to the dawn of the twentieth century, when the United States first found itself with the chance to dominate faraway lands. That prospect thrilled some Americans. It horrified others. Their debate gripped the nation.

The country’s best-known political and intellectual leaders took sides. Theodore Roosevelt, Henry Cabot Lodge, and William Randolph Hearst pushed for imperial expansion; Mark Twain, Booker T. Washington, and Andrew Carnegie preached restraint. Only once before—in the period when the United States was founded—have so many brilliant Americans so eloquently debated a question so fraught with meaning for all humanity.

All Americans, regardless of political perspective, can take inspiration from the titans who faced off in this epic confrontation. Their words are amazingly current. Every argument over America’s role in the world grows from this one. It all starts here.

Stephen Kinzer is the author of many books, including The True Flag, The Brothers, Overthrow, and All the Shah’s Men. An award-winning foreign correspondent, he served as the New York Times bureau chief in Nicaragua, Germany, and Turkey. He is a senior fellow at the Watson Institute for International and Public Affairs at Brown University, and writes a world affairs column for the Boston Globe. He lives in Boston.

"One could not ask for a timelier argument...Kinzer is right: the first debate over American empire at the end of the nineteenth century speaks to our own time."—The New York Review of Books

"lively and very readable reconstruction of one of American history's most consequential debates....What's striking now is how much this century-old debate mirrors contemporary issues and positions"—Dallas
Morning News

"Important and lucid...Kinzer is an incisive historian of American foreign policy."—Christian Science Monitor

"[A] gripping narrative . . . Kinzer ably conveys the passion and ferment of this brief period, situating this grand debate in the context of U.S. foreign policy history and convincingly arguing that the imperial/anti-imperial dichotomy remains a dominant feature of the American psyche." —Publishers Weekly (starred review)

“In this engaging, well-focused history…Kinzer astutely brings the debate [over American imperialism] from the turn of the century to the present. A tremendously elucidating book that should be required reading for civics courses."—Kirkus Reviews (starred review)

“This straight-forward treatment of America’s struggle to define its international posture is essential for readers at all levels as we continue this debate and wonder, ‘Why don’t they like us?’”—Library Journal (starred review)

“Stephen Kinzer’s The True Flag is a marvelous and timely look at the rise of American imperialism at the turn of the twentieth century. All the big power players of the era – Theodore Roosevelt and Mark Twain among them – are analyzed cogently as intellectuals of great merit. An outstanding book!”
—Douglas Brinkley, author of Rightful Heritage: Franklin D. Roosevelt and the Land of America and professor of history, Rice University

“Even in the pages of a novel, it would be impossible to find more extraordinary characters than Theodore Roosevelt and Mark Twain. That these two men locked horns over one of the most fundamental issues facing a young nation is a stunning turn of events, one that Stephen Kinzer, through meticulous research and masterful writing, has turned into a fascinating, fast-paced narrative.”
—Candice Millard, author of The River of Doubt, Destiny of the Republic, and Hero of the Empire

“At a moment when Americans are hotly debating their country’s role in the world, Stephen Kinzer takes us back to the origins of the modern debate. His account of the battle between imperialists and anti-imperialists at the end of the nineteenth century is riveting, uplifting, dismaying—and as timely as can be.”
—H. W. Brands, professor of history at the University of Texas at Austin and author of The General vs. the President: MacArthur and Truman at the Brink of Nuclear War

“In The True Flag, Stephen Kinzer gives us much more than the story of the birth of American dominion. He shows why we Americans were attracted to empire, how we have nurtured it to maturity, and what our choices are now. I thank him for helping me better understand how America acts in the world today.”
—James Bradley, author of Flags of Our Fathers, The Imperial Cruise, and The China Mirage

“Stephen Kinzer’s lively and incisive history takes us back more than a century to a fateful turning point: the moment when the United States first assumed the right to overthrow or build up regimes in distant parts of the globe. I hope American leaders will read this book and think long and hard about the warning it sounds." —Adam Hochschild, author of Spain in Our Hearts and King Leopold’s Ghost