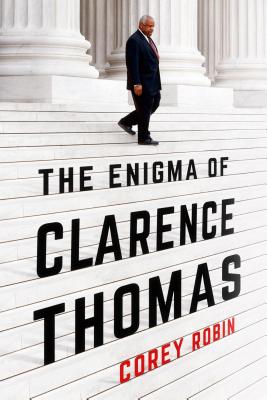 The Enigma of Clarence Thomas is a groundbreaking revisionist take on the Supreme Court justice everyone knows about but no one knows.


“One of the marvels of Robin’s razor-sharp book is how carefully he marshals his evidence.... It isn’t every day that reading about ideas can be both so gratifying and unsettling.” – The New York Times


Most people can tell you two things about Clarence Thomas: Anita Hill accused him of sexual harassment, and he almost never speaks from the bench. Here are some things they don’t know: Thomas is a black nationalist. In college he memorized the speeches of Malcolm X. He believes white people are incurably racist.

In the first examination of its kind, Corey Robin– one of the foremost analysts of the right (The Reactionary Mind) – delves deeply into both Thomas’s biography and his jurisprudence, masterfully reading his Supreme Court opinions against the backdrop of his autobiographical and political writings and speeches. The hidden source of Thomas’s conservative views, Robin shows, is a profound skepticism that racism can be overcome. Thomas is convinced that any government action on behalf of African-Americans will be tainted by racism; the most African-Americans can hope for is that white people will get out of their way.

There’s a reason, Robin concludes, why liberals often complain that Thomas doesn’t speak but seldom pay attention when he does. Were they to listen, they’d hear a racial pessimism that often sounds similar to their own. Cutting across the ideological spectrum, this unacknowledged consensus about the impossibility of progress is key to understanding today’s political stalemate.

Corey Robin is the author of The Reactionary Mind: Conservatism from Edmund Burke to Sarah Palin and Fear: The History of a Political Idea. He teaches political science at Brooklyn College and the CUNY Graduate Center. Robin’s writing has appeared in The New York Times, Harper’s, the London Review of Books, and The Nation, among other publications, and has been translated into eleven languages. He lives in Brooklyn, New York.

“Makes a strong case for its provocative thesis... Rigorous yet readable, frequently startling yet eminently persuasive... One of the marvels of Robin’s razor-sharp book is how carefully he marshals his evidence.... It isn’t every day that reading about ideas can be both so gratifying and unsettling, and Robin’s incisive and superbly argued book has made me think again.”
—The New York Times

“An important and well-argued book... Robin has produced a thoughtful and careful explication of Thomas’s core ideas, showing how they emerge partly from his biography and setting out their disturbing implications. This is as good a synthesis of Thomas’s intellectual world as we are likely to get.”
—The Washington Post

“The remarkable achievement of Robin’s thoroughly researched, cogently argued work is that it makes a compelling case for what is, initially, a startling argument.”
—The New York Times Book Review

“Robin sees a powerful continuity between Thomas’s black nationalism and his conservatism, extrapolating from his words a coherent worldview that helps explain his approach to a slew of issues, from voting rights to gun ownership, from the Commerce Clause to gender relations.... The Enigma of Clarence Thomas is the first book to fully tease out these strands of his thinking. The results are fascinating.”
—Bookforum

“Superb… A bold and original book… Like all the best biographies The Enigma of Clarence Thomas aims to reveal the inner workings of its subject, and Robin achieves this not by trawling through Thomas’s private life and talking to his colleagues but by anatomizing his 700 authored opinions.... Robin makes what he calls Thomas’s ‘invisible justice visible,’ and in doing so he reveals the invisibility of Thomas himself.”
—The Guardian

“Robin is the rare left-wing observer who takes Thomas’s political and legal mind seriously.... Thoroughly researched and engagingly written... this book is a valuable and overdue engagement with the nexus between Thomas’s early life, his black nationalism, and his political views.”
—National Review

“In his provocative new book, The Enigma of Clarence Thomas, Corey Robin... is deconstructing a sphinx, and his point carries the uncomfortable ring of truth.”
—The Atlantic

“Robin is one of our sharpest explicators of the right from the left, and the case he makes is round and convincing.”
—Mother Jones

“Lucid and brilliant... A magnificent and serious study... Read The Enigma of Clarence Thomas as well as everything else Robin has written. No political thinker in our time has been more devoted to understanding political thinking (as opposed to sociologizing or moralizing politics).”
—The Humanist

“When Clarence Thomas took his seat on the Supreme Court, no one could have predicted that he would become both the silent justice and the most influential justice. Corey Robin’s elegant and insightful analysis shows how Thomas’s blend of black nationalism and conservatism helped him fashion a jurisprudence that will shape American life for years to come. This is the book Court watchers—which we all should be—have waited for.”
—Annette Gordon-Reed, Pulitzer Prize–winning author of The Hemingses of Monticello

“Clarence Thomas is by far the Supreme Court’s most interesting and perplexing justice, criticized by many and understood by few. Working through Thomas’s writings, Corey Robin tells a remarkable story about a remarkable figure—a man of complex views whose austere philosophy has been hiding in plain sight. Robin shows us Thomas’s black nationalism, his deep pessimism about race relations, his fervent embrace of capitalism, and his stern demand for a severe and uncompromising system of criminal justice. What emerges is a portrait that is as fascinating as it is disturbing. You may think you know who Clarence Thomas is, but you don’t know the half of it. This book is a revelation.”
—Jack M. Balkin, author of Living Originalism

“It requires the ferocious curiosity and intellectual courage of a Corey Robin to brave one of the most vexing mysteries faced by Supreme Court watchers: How to reconcile Clarence Thomas’s radical conservatism with his unforgiving use of race as jurisprudential lodestar? For conservatives blinkered to Thomas’s essentialism on race, and for liberals who refuse to reckon with his lived experience of black marginalization and stigma, this book will be equally discomfiting and eye-opening.”
—Dahlia Lithwick, senior editor, Slate

“Only a political diagnostician as keenly incisive as Corey Robin could render such a complex and fascinating portrait of Clarence Thomas. This meticulous analysis of the touchstones and turning points in Thomas’s life finds ideological consistency in the seemingly quirky patchwork of his thought: an odd amalgam of ultra-libertarian revanchism, patriarchal fundamentalism, black nationalism, and state-backed authoritarianism. Robin delivers a riveting guide to the multiple paradoxes that underlie Thomas’s unusually self-protective persona, and masterfully shows their resonance in the juridical rulings that govern us all.”
—Patricia J. Williams, author of The Alchemy of Race and Rights