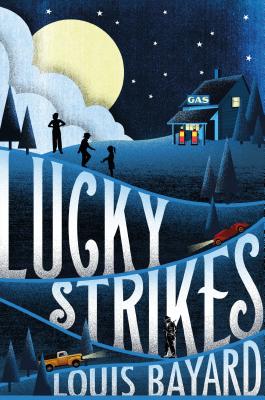 With her mama recently dead and her pa sight unseen since birth, Amelia is suddenly in charge of her younger brother and sister—and of the family gas station. Harley Blevins, local king and emperor of Standard Oil, is in hot pursuit to clinch his fuel monopoly. To keep him at bay and keep her family out of foster care, Melia must come up with a father—and fast. And so when a hobo rolls out of a passing truck, Melia grabs opportunity by its beard. Can she hold off the hounds till she comes of age?

Louis Bayard is the author of the critically acclaimed The School of Night and The Black Tower, the national bestseller The Pale Blue Eye, and Mr. Timothy, a New York Times Notable Book. He has written for Salon, The New York Times, The Washington Post, and the Los Angeles Times, among others. He lives in Washington, D.C.

"Sublime. . . . a near-perfect novel, rich in voice and emotion. Much like Melia herself, it is brash with bravado, barely concealing an inviting layer of warmth at its core." —The New York Times Book Review on Lucky Strikes

"a novel that is narratively gripping, emotionally astute and deeply enjoyable." —The Washington Post on Lucky Strikes

"this is a darn good yarn with plenty of room for rooting and more than a few laughs." —Booklist, starred review on Lucky Strikes

"the story hurtles to a surprising, honest conclusion—the "you" addressed in the first line is a tender surprise. A grand adventure." —Kirkus, starred review on Lucky Strikes

"Featuring a heroine as pragmatic and resourceful as Mary Call from Where the Lilies Bloom, adult author Bayard's (Roosevelt's Beast) poignant Depression-era novel traces the struggles of 14-year-old Melia Hoyle and her siblings after their mother's death." —Publishers Weekly, starred review on Lucky Strikes

"Joining the ranks of Scout from Harper Lee's To Kill a Mockingbird and Frankie from Carson McCullers's The Member of the Wedding, Melia is a southern force to be reckoned with. . . . Although Louis Bayard is best known for his historical mysteries (The Pale Blue Eye) and his Downton Abbey recaps in the New York Times, his foray into young adult literature may be his finest work yet." —Shelf Awareness, starred review on Lucky Strikes

"Lionhearted Amelia’s spirit is relentless and full of moxie. . . a stunning tale. Lucky Strikes is a captivating read with a lot of heart. Sure to appeal to mature audiences that love strong storytelling, language, and historical fiction, as well as stories about misfits and found family." —VOYA, starred review on Lucky Strikes

“Brilliantly plotted and completely absorbing, ending with the kind of shock that few novelists are able to deliver.” —Sunday Times (London)

A dazzling blend of literary fiction and white-knuckle thriller.” —People