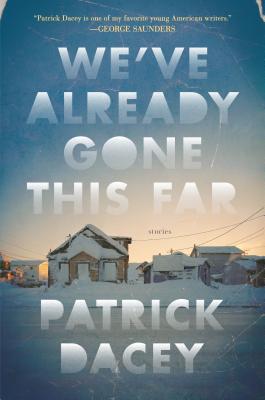 By Patrick Dacey
Email or call for price
Out of Print

Even if I hadn't read We've Already Gone This Far, I would know that it's good because George Saunders says so and George Saunders is never wrong. But I DID read it, which is how I know it's amazing! The stories are simple on the surface, but every one of them made me laugh and broke my heart, sometimes in the span of a few sentences. Dacey's characters are both comically and tragically flawed, but the compassion he feels for them inspired the same reaction in me. I fear becoming these people, but I loved reading about them!

A heartfelt, vital collection; the debut of an exciting new talent already hailed as one of George Saunders' "favorite young American writers"

In Patrick Dacey's stunning debut, we meet longtime neighbors and friends--citizens of working-class Wequaquet--right when the ground beneath their feet has shifted in ways they don't yet understand. Here, after more than a decade of boom and bust, love and pride are closely twinned and dangerously deployed: a lonely woman attacks a memorial to a neighbor's veteran son; a dissatisfied housewife goes overboard with cosmetic surgery on national television; a young father walks away from one of the few jobs left in town, a soldier writes home to a mother who is becoming increasingly unhinged. We've Already Gone This Far takes us to a town like many towns in America, a place where people are searching for what is now an almost out-of-reach version of the American Dream

Story by story, Dacey draws us into the secret lives of recognizable strangers and reminds us that life's strange intensity and occasional magic is all around us, especially in the everyday. With a skewering insight and real warmth of spirit, Dacey delivers that rare and wonderful thing in American fiction: a deeply-felt, deeply-imagined book about where we've been and how far we have to go.

Patrick Dacey holds an MFA from Syracuse University. He has taught English at several universities in the U.S. and Mexico, and has worked as a reporter, landscaper, door-to-door salesman, and most recently on the overnight staff at a homeless shelter and detox center. His stories have been featured in The Paris Review, Zoetrope All-Story,Guernica, Bomb magazine, and Salt Hill among other publications. Patrick is the author of The Outer Cape and We've Already Gone This Far.

“Patrick Dacey is one of my favorite young American writers. The stories in We've Already Gone This Far are dangerous, funny, sometimes savage (the phrase 'lyrical hammers' comes to mind), but underneath it all beats a strangely kind and hopeful heart. Dacey is channeling both a terrifyingly dark view of America, as well as a movingly optimistic one, and he shows us that the truth of who we are lies in that very juxtaposition. Fast, poetic, edgy, full of tremendous affection for the things of the world.” —George Saunders

“Excellent. . . ambitious and heartfelt . . .an impressive debut. While not every story is perfect, the best of them are harsh but beautiful reminders of the cost of wars—not just the ones overseas, but the ones we wage against ourselves.” —Michael Schaub, NPR

“[A] remarkable first short-story collection. . . .Dacey’s naturalistic writing always feels clear-eyed and assured, his most mesmerizing stories capable of breaking free from their surroundings like a running back turning a short-yard gain into the improbable, tackle-breaking touchdown.” —Style Weekly (Richmond)

“The title tells the tale: The characters in Dacey’s debut collection have already gone this far, so they might as well keep going, just to see what’s up ahead.” —The Toronto Star

“Breathtakingly good . . . . Dacey has a special knack for leavening his prose with wickedly funny, satirical flourishes. . . .Dacey is an agile writer who mixes satire with scenes of great emotional depth and empathy.” —Richmond Times-Dispatch

"Patrick Dacey's We've Already Gone This Far is a rock-solid and mercifully unpretentious collection of stories, the sort of book I'm always in search of, but rarely finding. This is a book about people who (mostly) do honest work for a living by a writer who knows how hard it is out here on the ground in America. Generous and beautifully written." —Peter Orner

"In the keen, observational short-story style of writers such as George Saunders and Lauren Groff, We’ve Already Gone This Far illuminates both the quotidian details and the profound strangeness of modern American life. Readers will find this set of mournful, biting, and resonant tales united not only by geography but also by Dacey’s deep humanity towards his flawed characters." —Booklist

“Dacey’s breakout collection shows that small towns can still yield big fictional rewards…Despite the exhausted, drained characters, these tales of neighborly conflicts, professional and personal malaise, and family tragedy are marked by a certain buoyancy. In describing these frustrated lives, Dacey can be as funny as he is compassionate.” —Publishers Weekly

“…Irreverent…poignant…superb…A fine debut collection from a storyteller who improves as the stakes get higher.” —Kirkus

"Patrick Dacey is a wonderfully talented writer, and among his many gifts is his willingness to explore the hole in the heart (and I believe we all have at least one if we've truly lived), and to find humor and grace in the sadness that surrounds it. We've Already Gone This Far is one of the best collections I've read in a long time." —Donald Ray Pollock

"These thirteen stories are linked not just through place and character but also by their pursuit of a warped form of happiness. Together they provide a startling portrait of American life today. A daringly resonant collection with the best endings in the business."—Courtney Maum

“Whether a used-car salesman or past-his-prime coach or lonely mother of a deployed soldier, the characters in Dacey's collection are 'living on these images of the past' looking for something that glimmers just out of reach. A book that brims with unguarded humanity and quiet moments of communion, I couldn't stop reading it. Dacey is a masterful prose stylist, a vibrant and original new literary voice.” —Rae Meadows