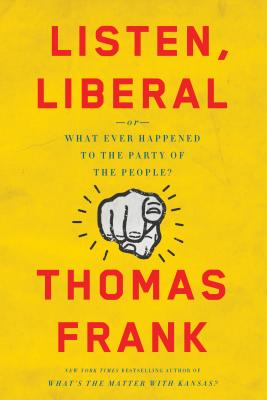 By Thomas Frank
Email or call for price
Out of Print

From the bestselling author of What’s the Matter With Kansas, a scathing look at the failures of liberal politics, a book that helps explain the shocking outcome of the 2016 presidential election

It is a widespread belief among liberals that if only Democrats can continue to dominate national elections, if only those awful Republicans are beaten into submission, the country will be on the right course.

But this is to fundamentally misunderstand the modern Democratic Party. Drawing on years of research and first-hand reporting, Frank points out that the Democrats have done little to advance traditional liberal goals: expanding opportunity, fighting for social justice, and ensuring that workers get a fair deal. Indeed, they have scarcely dented the free-market consensus at all. This is not for lack of opportunity: Democrats have occupied the White House for sixteen of the last twenty-four years, and yet the decline of the middle class has only accelerated. Wall Street gets its bailouts, wages keep falling, and the free-trade deals keep coming.

With his trademark sardonic wit and lacerating logic, Frank's Listen, Liberal lays bare the essence of the Democratic Party's philosophy and how it has changed over the years. A form of corporate and cultural elitism has largely eclipsed the party's old working-class commitment, he finds. For certain favored groups, this has meant prosperity. But for the nation as a whole, it is a one-way ticket into the abyss of inequality. In this critical election year, Frank recalls the Democrats to their historic goals-the only way to reverse the ever-deepening rift between the rich and the poor in America.

Thomas Frank is the author of Listen, Liberal, Pity the Billionaire, The Wrecking Crew, and What's the Matter with Kansas? A former columnist for The Wall Street Journal and Harper's, Frank is the founding editor of The Baffler and writes regularly for The Guardian. He lives outside Washington, D.C.

“Thoroughly entertaining . . . Frank delights in skewering the sacred cows of coastal liberalism . . . he argues that the Democratic party—once “the Party of the People”—now caters to the interests of a “professional managerial class” consisting of lawyers, doctors, professors, scientists, programmers, even investment bankers . . . A serious political critique.”
—New York Times Book Review (front page)

“What makes Frank’s book new, different and important is its offer of a compelling theory as to how and why the party of Jefferson, Jackson and Roosevelt is now so unlikely to champion the economic needs of everyday people. . . . In such a looking-glass world, Listen, Liberal is a desperately needed corrective.”
—History News Network

“In his new book, progressive commentator Thomas Frank says Democrats need to take a good long look in the mirror if they want answers to why blue-collar workers are feeling abandoned and even infuriated by what used to be their party.”
—New York Post

“The most important political book of 2016, and one that should disturb and hopefully influence progressives for years to come.”
—OBRag.com

“Over the past four decades, Frank argues, the Democrats have embraced a new favorite constituency: the professional class—the doctors, lawyers, engineers, programmers, entrepreneurs, artists, writers, financiers and other so-called creatives whose fetish for academic credentials and technological innovation has infected the party of the working class. . . . For that class, Frank argues, income and wealth inequality is not a problem but an inevitable condition.”
—Washington Post

“An astute dissection of contemporary Democratic politics that demonstrates, cogently and at times acidly, how the party lost the allegiance of blue-collar Americans.”
—Publisher’s Weekly

“No one has written more consistently and stylishly about the conservative onslaught in America and the betrayal of liberal democratic values than Thomas Frank, arguably the Left’s leading essayists and the founder of The Baffler. This is Mr. Frank’s best book since What’s the Matter with Kansas?”
—Pittsburgh Post-Gazette

“A tough and thought-provoking look at what’s wrong with America . . . Frank puts forth an impressive catalog of Democratic disappointments, more than enough to make liberals uncomfortable.”
—Booklist

“Important . . . engaging . . . An edgy—even disturbing—analysis of the Democratic Party’s jilting of its traditional base.”
—The National Book Review

“An engaging and witty demolition of the [Democratic] party, especially its modern post-New Deal incarnation . . . Listen, Liberal is a great read for this election season.”
—SocialistWorker.org

“Thomas Frank’s new book Listen, Liberal documents a half-century of work by the Democratic elite to belittle working people and exile their concerns to the fringes of the party’s platform. If the prevailing ideology of the Republican establishment is that of a sneering aristocracy, Democratic elites are all too often the purveyors of a smirking meritocracy that offers working people very little.”
—Huffington Post

“Long overdue . . . Listen, Liberal is a powerful addition to America’s political discourse. It is full of truths and, sadly, the truth hurts.”
—Washington City Paper

“Democrats often use the fact that Republicans have gone off the deep end to ignore their left flank, on the grounds that those liberals have nowhere else to go politically. Listen, Liberal contributes to the literature that expresses deep frustration with that decision, the fuel for a revolt.”
—The Fiscal Times

“As with Frank’s other books, Listen, Liberal is a piece of contemporary history that tells us not only what the powerful are up to, but how the trick is being pulled, with an admirable deployment of irony. . . . While his previous books are essentially about devils being devils, this one shows how the angels have fallen further than they realize.”
—Prospect (UK)