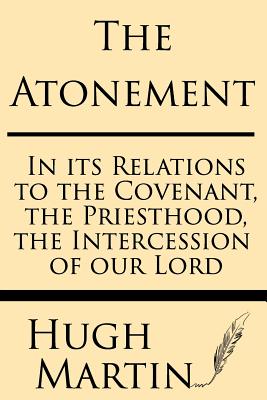 THE ATONEMENT: IN ITS RELATIONS TO THE COVENANT, THE PRIESTHOOD, THE INTERCESSION OF OUR LORD
By Hugh Martin, D. D.
Contents I. Atonement and the Covenant of Grace
II. Atonement and the Federal Theology
III. Atonement and Christ's Priestly Office
IV. Christ's Priestly Action in His Death
V. Atonement and Intercession: -- I. The Direct Argument
VI. Atonement and Intercession: -- II. The Inverse Argument
VII. Atonement and Remission
VIII. The Counter-Imputations of Sin and Righteousness
IX. Robertson of Brighton's Views of Vicarious Sacrifice
X. Atonement, and the Distinctive Peculiarity of Moral Law
Appendix: --A Discourse on God's Blessedness and His Statutes
Preface This volume, it will be obvious, does not profess to be a systematic treatise on the great Doctrine of the Atonement. For that reason, I would have been glad to give it the unpretending title, "Papers on the Atonement;" and I was anxious to have done so. But it was represented to me, by a friend in whose judgment I have confidence, that such a designation would convey the impression that the following discussions are miscellaneous and fragmentary, --which a glance at the Table of Contents will show is far from being the case. Hence I have qualified the general title, "The Atonement," by the supplementary clause, "In its relations to the Covenant, the Priesthood, the Intercession of our Lord." And this indicates pretty exactly the real scope of the volume. In a word, my object is to indicate certain conditions under which the Doctrine of Atonement ought to be discussed; and that with a twofold view. First, in order to clear away at the outset all temptation to priori speculation, seeing that it is not an abstract and philosophical theory of Atonement we have to deal with, but the revealed reality of the actual sacrifice of the Son of God on Calvary. And, secondly, because--as I think the intelligent reader of these pages, after perusing them, will be prepared to admit--the discussion, when conducted under the conditions indicated, can be pointed with the very greatest ease, and with extreme brevity of treatment, to the overthrow of all those current speculations of the day which have in view to set aside the Catholic Doctrine of the Cross. Their refutation comes out in the shape of corollaries, that are all but intuitively obvious, and, as I believe, utterly indisputable. It is only in the view of such occasionally occurring corollaries, or inferences, in refutation of error, that this book can in any sense be called controversial. Properly speaking, a controversial volume it is not. . . ------------------------------------------------------------------------------------------------------------------------------------------ Windham Press is committed to bringing the lost cultural heritage of ages past into the 21st century through high-quality reproductions of original, classic printed works at affordable prices. This book has been carefully crafted to utilize the original images of antique books rather than error-prone OCR text. This also preserves the work of the original typesetters of these classics, unknown craftsmen who laid out the text, often by hand, of each and every page you will read. Their subtle art involving judgment and interaction with the text is in many ways superior and more human than the mechanical methods utilized today, and gave each book a unique, hand-crafted feel in its text that connected the reader organically to the art of bindery and book-making. We think these benefits are worth the occasional imperfection resulting from the age of these books at the time of scanning, and their vintage feel provides a connection to the past that goes beyond the mere words of the text.