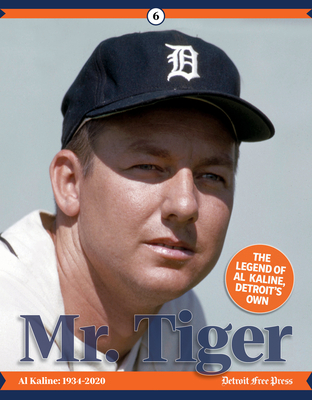 “Mr. Tiger” Al Kaline was the most distinguished Detroit Tiger of them all, combining on-field excellence, acclaim and awards with off-field class, humility and generosity. Kaline made such an impact that his passing at 85 on April 6, 2020, saddened not just Tigers fans throughout the region but baseball fans everywhere, who watched with admiration and respect during Kaline’s storybook 22-year Hall of Fame career.

Mr. Tiger: The Legend of Al Kaline, Detroit’s Own is a celebration of Kaline’s distinguished and incomparable run as a Tiger, from his fresh-faced major-league debut at 18 years old and his historic American League batting title at only 20, to his memorable 3,000th hit in the stretch run of the final season of his epic career. Through memorable stories and striking photography from the Detroit Free Press, this commemorative book is the definitive account of Kaline’s 18 All-Star selections, 10 Gold Gloves and, most memorably, his huge contribution to the Tigers’ unforgettable 1968 World Series championship.

Fans will celebrate Al Kaline’s legacy for generations to come and Mr. Tiger is the perfect keepsake to preserve those memories and relive them one incredible moment at a time.

The Detroit Free Press is the largest daily newspaper in Michigan, with a daily circulation of more than 200,000 copies. Founded in 1831, the newspaper has won 10 Pulitzer Prizes. It is based in Detroit, Michigan.