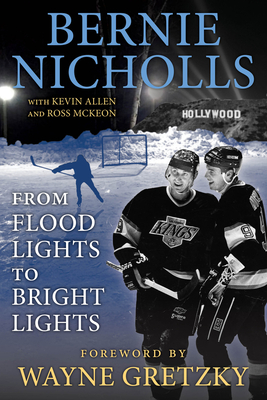 Across more than a thousand games in the National Hockey League, Bernie Nicholls made his mark with flamboyant style and dynamic scoring prowess. In this new autobiography, Nicholls reflects on his life on and off the ice, sharing candid anecdotes and personal insights from across the hockey landscape. From his childhood in the small Northern Ontario town of West Guilford, to his sensational 70-goal season in Los Angeles, and his recent years in coaching and retirement, this is a refreshing chronicle of a legendary career.

Hailing from the small Northern Ontario town of West Guilford (population: 75), Bernie Nicholls is one of only eight players in NHL history to score 70 goals in one season and one of five to score 150 points. Displaying flamboyance and a style that set him apart during an 18-year career, Nicholls amassed 475 goals and 1,209 points in 1,127 games with six teams. He scored 42 goals and 114 points in 118 career playoff games. As a coaching consultant, Nicholls assisted the Los Angeles Kings to a franchise-first Stanley Cup in 2012, and he remains passionate about hunting, golf, and family.

Ross McKeon has covered the San Jose Sharks and NHL since 1991 with work appearing in the San Francisco Examiner and San Francisco Chronicle, NHL.com, Yahoo! Sports, The Hockey News, and Sports Illustrated, in addition to other media outlets and publications including sports commentary on NBC Sports Bay Area. A Bay Area native and sports journalist since 1978, McKeon is the author of 100 Things Sharks Fans Should Know & Do Before They Die and If These Walls Could Talk: San Jose Sharks with Dan Rusanowsky.

Wayne Gretzky, known as “The Great One,” is regarded as the greatest hockey player in the sport’s history.