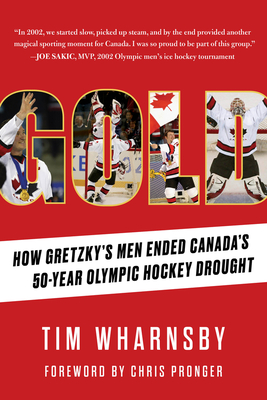 "Now after 50 years, it's time for Canada to stand up and cheer. Stand up and cheer everybody! The Olympics Salt Lake City, 2002, men's ice hockey gold medal: Canada!" —Bob Cole, CBC play-by-play broadcaster

There was no iconic Paul Henderson moment, nor a Sidney Crosby golden goal, but Canada’s 5-2 victory against the rival United States in the men's 2002 Olympic gold medal game wiped out 50 years of frustration for the nation that invented ice hockey.

Canadians from coast to coast were whipped into a frenzy, with impromptu celebrations on streets like Granville in Vancouver, Yonge in Toronto, Ste-Catherine in Montreal, and Portage and Main in Winnipeg.

Gold is the definitive chronicle of how the men of Team Canada made history. Marking 20 years since the momentous victory, Tim Wharnsby delivers the inside story of how Gretzky built the team and Pat Quinn got them to the gold medal, featuring exclusive interviews with players, coaches, and personnel.

Readers will hear directly from Gretzky, Jarome Iginla, Joe Sakic, Steve Yzerman, and more in this thrilling and immersive narrative of Olympic triumph.

Tim Wharnsby has spent more than 30 years as a sports reporter with the Toronto Sun as well as the Globe and Mail. He also appeared on Hockey Night in Canada several times in 2012 and composed the anchor features for Hockey Day in Canada in 2013 and 2014 on deaf junior player Gregg Sutch and the 10th anniversary of Dan Snyder's fatal car accident, respectively. Wharnsby, a native of Waterloo, ON., lives in the downtown Toronto neighbourhood of Corktown with his wife, Kathy.