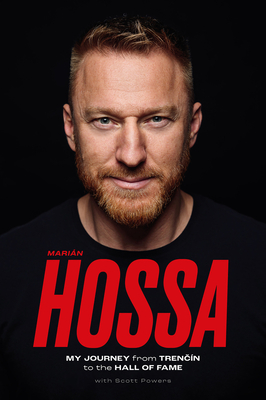 A Stanley Cup champion and modern legend of the game, in his own words

Marián Hossa’s life is a lesson in the value of determination and perseverance. Born into a hockey family that included his father, a former player and coach of the Slovakian national team, Marián and his brother, Marcel, quickly fell in love with the sport. Before long, they began to display the level of skill that could lead to a professional career. But the odds of reaching the NHL from Trenčín, a town of 50,000 people nestled among the mountains of Slovakia, remained long.

Determined to follow their dreams, the Hossas persevered and were each eventually drafted in the first round. After some outstanding years in Ottawa and Atlanta, Marián moved on to Pittsburgh in 2008, where he helped lead the Penguins to the Stanley Cup Final against Detroit, a series his team lost.

Prioritizing winning over dollars, Hossa signed with the Red Wings the following season, where he again reached the Final only to find heartbreak again, improbably against the team he had just left, the Penguins. It seemed that perhaps he would never raise Lord Stanley’s Cup above his head.

But Hossa persevered, refusing to give in. In 2009, he signed with the Chicago Blackhawks, and played a key role in the team’s dynastic run the following decade, winning championships in 2010, 2013, and 2015. Then, yet another obstacle appeared in his path: an unusual and debilitating skin condition that compelled him to retire years before he’d planned.
​
In this inspiring and entertaining autobiography, Hossa brings readers inside the dressing room, onto the celebratory team plane, and alongside one of hockey’s greatest stars as he makes the biggest decisions of his career.

Also featuring photos from Hossa's personal collection, this is an essential read for all hockey fans.

Marián Hossa played 19 seasons in the National Hockey League for the Ottawa Senators, Atlanta Thrashers, Pittsburgh Penguins, Detroit Red Wings, and Chicago Blackhawks. A five-time All-Star and three-time Stanley Cup champion with the Blackhawks, Hossa was elected into the Hockey Hall of Fame in 2020.

Scott Powers is a senior staff writer for The Athletic. He previously worked for ESPN covering the NHL. He lives in Chicago. With Darryl Belfy, he co-authored Belfry Hockey: Strategies to Teach the World's Best Athletes.