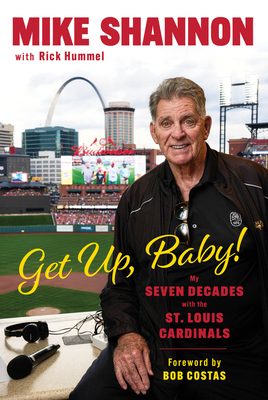 Mike Shannon's voice served as the soundtrack of St. Louis Cardinals baseball for 50 years. Millions of fans have enjoyed his observations, insight, and magical storytelling on radio broadcasts. Now, with the help of Hall of Fame baseball writer Rick Hummel, the St. Louis native and lifelong Cards fan takes fans behind the mic, into the clubhouse, and beyond as only he can.

Shannon weaves countless unforgettable tales, from childhood memories growing up in south St. Louis to champagne-soaked World Series celebrations as a player in 1964 and 1967, plus encounters with Cardinals legends ranging from Bob Gibson and Ozzie Smith, to Albert Pujols and Yadier Molina.

This unmissable autobiography gives fans a rare seat to over six decades of Cardinals history, hijinks, and lore.

Rick Hummel is an author and columnist who has covered baseball at the St. Louis Post-Dispatch for five decades. He was inducted into the National Baseball Hall of Fame in 2007 when he was honored with the J. G. Taylor Spink Award for baseball writing. Hummel is the co-author of Tony La Russa's memoir One Last Strike: Fifty Years in Baseball, Ten and a Half Games Back, and One Final Championship Season.