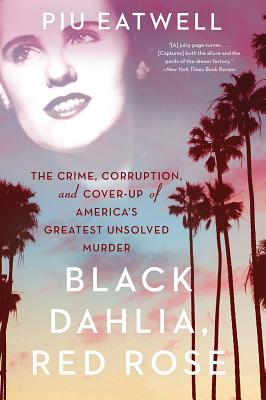 By Piu Eatwell
$15.95
Not Available In-Store - Usually Ships from Warehouse in 1-5 Days

One of Bustle's "Best True Crime Books of the Year"

“[A] juicy page turner . . . capturing both the allure and the perils of the dream factory that promised riches and fame.”—New York Times Book Review

The gruesome 1947 murder of hopeful starlet Elizabeth Short holds a permanent place in American lore as one of our most inscrutable true-crime mysteries. In a groundbreaking feat of detection hailed as “extensive” and “convincing” (Bustle), skilled legal sleuth Piu Eatwell cracks the case after seventy years, rescuing Short from tabloid fodder to reveal the woman behind the headlines. Drawing on recently unredacted FBI and LAPD files and exclusive interviews, Black Dahlia, Red Rose is a gripping panorama of noir-tinged 1940s Hollywood and a definitive account of one of the biggest unsolved murders of American legal history.

Piu Eatwell is the author of Black Dahlia, Red Rose and The Dead Duke, His Secret Wife, and the Missing Corpse and has produced and researched historical documentaries for the BBC and other channels, including the widely acclaimed film Charles Manson: The Man Who Killed the Sixties. She divides her time between Paris and London with her husband and three children.

Black Dahlia, Red Rose by Piu Eatwell provides fresh evidence that we can never get enough of our favorite pin-up corpse. . . . [A] juicy page turner…capturing both the allure and the perils of the dream factory that promised riches and fame to star-struck young women from tired little towns all over war-weary America and who, even today, find themselves at the mercy of predatory men.

Black Dahlia, Red Rose . . . put[s] Elizabeth Short at the center of her own story, while still managing to read like a classic noir tale. Eatwell's extensive research pays off in the narrative, which is impressively detailed. . . . Fascinating.


Eatwell writes brilliantly . . . After decades of cultural appropriation by journalists, novelists and film-makers, Eatwell has finally offered [Elizabeth] Short a type of belated justice. Her book reads like a thriller, but it never loses sight of the real woman whose life was so savagely extinguished.

A meticulously researched work that is delivered with all the punch, pace and suspense of the finest noir thrillers . . . Eatwell never forgets the tragic figure at the heart of her story, while emphasising the callousness of the post-second World War era in which she was so brutally murdered.

A thoroughly researched look at the crime . . . Eatwell successfully paints a portrait of the city and its police department, signifying that the cover-up and corruption involved in this case (as well as throughout the department) was a product of the time and not reflective of today's practices. . . . .The investigative materials provide a solid foundation for Eatwell's film noir-style narrative; a first purchase where true crime titles circulate widely.

Piu Eatwell is hot on the trail of one of the twentieth century’s most famous cold cases—the Black Dahlia murder—and she takes us along for the ride…back to Los Angeles in the winter of 1947, back to the wealth of evidence assembled by the cops, by the tabloids and news dailies, by a 1949 grand jury. The ride is well worth taking, especially when she hones in on a plausible and previously neglected suspect in the case.
— Jon Lewis, author of Hard-Boiled Hollywood: Crime and Punishment in Postwar Los Angeles

Compulsively readable, impeccably researched and heart-rending at times, Black Dahlia, Red Rose deserves a place at the top of any true crime aficionado’s bookshelf. With forensic precision and an admirable eye for detail, Piu Eatwell not only uncovers plausible new insights into the notorious and brutal murder of Elizabeth Short, she unpicks the mores of the time, delves into the motivations of the main players and blasts through the smoky noir clichés surrounding 1940s Los Angeles.

— Sarah Lotz, author of Day Four and The Three