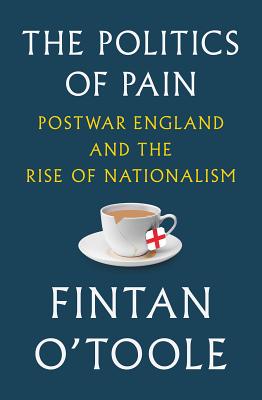 “I read The Politics of Pain: Postwar England and the Rise of Nationalism by Fintan O’Toole and wished I’d written it.” – Zadie Smith, Wall Street Journal

From one of the most perceptive observers of the English today comes a brilliantly insightful, mordantly funny account of their seemingly irrational embrace of nationalism.

England’s recent lurch to the right appears to be but one example of the nationalist wave sweeping across the world, yet as acclaimed Irish critic Fintan O’Toole suggests in The Politics of Pain, it is, in reality, a phenomenon rooted in World War II. We must look not to the vagaries of the European Union but, instead, far back to the end of the British empire, if we hope to understand our most fraternal ally—and the royal mess in which the British now find themselves. O’Toole depicts a roiling nation that almost ludicrously dreams of a German invasion, if only to get the blood going, and that erupts in faux outrage over regulations on “prawn-flavored crisps.” A sympathetic yet unsparing observer, O’Toole asks: How did a great nation bring itself to the point of such willful self-harm? His answer represents one of the most profound portraits of the English since Sarah Lyall’s New York Times bestseller The Anglo Files.

Fintan O'Toole is a columnist for the Irish Times and a professor at Princeton University. A regular contributor to the New York Review of Books and the Guardian and the author of several books, he lives in Princeton, New Jersey, and Dublin, Ireland.

Slyly brilliant… The Politics of Pain is searching and elegantly argued. O’Toole isn’t unsympathetic to those who voted in favor of Brexit, but makes abundantly clear that he believes they were suckered into a raw deal.

There could be no better guide to the murky labyrinth that has brought us here than The Politics of Pain, by Fintan O’Toole, a quizzical, acerbic Irishman who bears a passing physical resemblance to Samuel Beckett and who deploys more than a little of Beckett’s frosty irony…. [An] irresistible firecracker of a book.

An essayist of uncommon depth and breadth… Brexit, O’Toole persuasively argues, ‘is driven by a force—English nationalism—that its leaders still refuse to articulate’… His summation of the paradox at the heart of Brexit is succinct and shrewd.
— Isaac Chotiner, The New Yorker

A solid combination of candor, clever turns of phrase, and clear insight into the English psyche.
— Kirkus Reviews [starred review]

No nation really wants to be understood as well as Fintan O'Toole understands the English. This painfully entertaining account of Brexit, written in the beautiful tradition of Irish satire, is all the more extraordinary for being entirely fair and factual. It is a superb guide to contemporary England that can help us all to think about how to improve our democracies.
— Timothy Snyder, bestselling author of On Tyranny