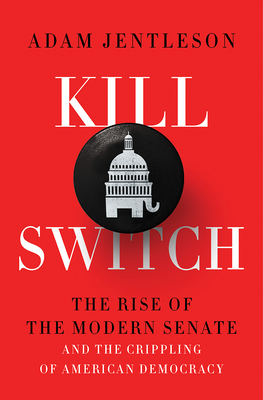 THE CASE FOR ENDING THE FILIBUSTER

An insider’s account of how politicians representing a radical white minority of Americans have used “the world’s greatest deliberative body” to hijack our democracy.

Every major decision governing our diverse, majority-female, and increasingly liberal country bears the stamp of the United States Senate, an institution controlled by people who are almost exclusively white, overwhelmingly male, and disproportionately conservative. Although they do not represent a majority of Americans—and will not for the foreseeable future—today’s Republican senators possess the power to block most legislation. Once known as “the world’s greatest deliberative body,” the Senate has become one of the greatest threats to our democracy. How did this happen?

In Kill Switch, Senate insider Adam Jentleson contends that far from reflecting the Framers’ vision, the Senate has been transformed over the decades by a tenacious minority of white conservatives. From John Calhoun in the mid-1800s to Mitch McConnell in the 2010s, their primary weapon has been the filibuster, or the requirement that most legislation secure the support of a supermajority of senators. Yet, as Jentleson reveals, the filibuster was not a feature of the original Senate and, in allowing a determined minority to gridlock the federal government, runs utterly counter to the Framers’ intent.

For much of its history, the filibuster was used primarily to prevent civil rights legislation from becoming law. But more recently, Republicans have refined it into a tool for imposing their will on all issues, wielding it to thwart an increasingly progressive American majority represented by Barack Obama’s agenda and appointees. Under Donald Trump, McConnell merged the filibuster with rigid leadership structures initially forged by Lyndon Johnson, in the process surrendering the Senate’s independence and centrality, as infamously shown by its acquiescence in Trump’s impeachment trial. The result is a failed institution and a crippled democracy.

Taking us into the Capitol Hill backrooms where the institution’s decline is most evident, Jentleson shows that many of the greatest challenges of our era—partisan polarization, dark money, a media culture built on manufactured outrage—converge within the Senate. Even as he charts the larger forces that have shaped the institution where he served, Jentleson offers incisive portraits of the powerful senators who laid the foundation for the modern Senate, from Calhoun to McConnell to LBJ’s mentor, Richard Russell, to the unapologetic racist Jesse Helms.

An essential, revelatory investigation, Kill Switch ultimately makes clear that unless we immediately and drastically reform the Senate’s rules and practices—starting with reforming the filibuster—we face the prospect of permanent minority rule in America.

Adam Jentleson is the executive director of Battle Born Collective and a former deputy chief of staff to Senator Harry Reid. A columnist for GQ and frequent political commentator on MSNBC, he lives in Takoma Park, Maryland.

Adam Jentleson’s Kill Switch is the most exquisitely timed book I’ve encountered in years. Jentleson’s explanation of the filibuster’s ignominious roots, and of the mendacious arguments made today by its defenders, is careful and thorough and exacting. Every senator should be forced to read it and then reread it.

[An] excellent, surprising new book . . . Jentleson is knowledgeable and adept, offering an account of increasingly flagrant obstruction that culminates in the age of McConnell.
— Benjamin Wallace-Wells - The New Yorker

An impeccably timed book. . . . In Kill Switch, Jentleson explains how ‘the world’s greatest deliberative body’ has come to carry out its work without much greatness or even deliberation, serving instead as a place where ambitious legislation goes to die. . . . [Jentleson’s] intimacy with the Senate turns out to be his book’s greatest strength. Jentleson understands the inner workings of the institution, down to the most granular details, showing precisely how arcane procedural rules can be leveraged to dramatic effect.

[L]eading Democrats, including Reid and former president Barack Obama, are pressing for a sweeping rehab of the “home” Biden has found so comfortable. Kill Switch: The Rise of the Modern Senate and the Crippling of American Democracy, a new book by Adam Jentleson, makes for a powerful brief on their behalf… a compelling read.

[A]n important new book… Adam Jentleson offers a harrowing portrait of how anti-majoritarian dysfunction has paralyzed the U.S. Senate… he writes with an insider’s knowledge… As the Senate has deviated further and further from majoritarian norms, the House and the state legislatures have followed. Among the great merits of Jentleson’s Kill Switch is that it reminds us how recent this trend is.

[C]harts the rise and repeated mutations of the filibuster… Jentleson assesses the chamber without the institutional nostalgia that tends to infect its alumni. He ably punctures the propaganda its advocates created to defend it (primarily a tool to allow the South from being outnumbered in Congress by the North, first on slavery, and later on civil rights).
— Jonathan Chait - New York

[A] well-crafted call for reform… lively and effective… enlivened with war stories… Jentleson’s point in retelling the history is to drive a truck through defenders’ two leading talking points. First, the filibuster was never about the principle of unlimited debate. That was always a fig leaf for minority power. Second, its effects are not symmetric; no reason to cool it on reform because the shoe will eventually be on the other foot. Democrats want more from the federal government and need legislation to enact it.
— Daniel Schlozman - n+1

Informative and timely... A startling read that will provoke tough questions about governance, this is highly recommended to all interested in government reform.
— Library Journal, starred review

Engrossing... Jentleson skillfully clarifies many arcane legislative procedures and brings a wide range of historical episodes to vivid life. Readers will be galvanized to make the issue of Senate reform a priority.
— Publishers Weekly, starred review

In Kill Switch, Adam Jentleson has created both an essential portrait of a Senate—and a political system—in crisis, as well as a crystal-clear analysis of how to save it. Combining prodigious research with the experience of serving at the right hand of Harry Reid, this is a necessary book for understanding why the Senate has become the key impediment to governance in America. Every member of the US Senate should read it, and so should the rest of us.

Kill Switch is a damning account of how a tool honed to maintain white supremacy has come to cost us all. After reading Jentleson's book, you'll understand why President Obama called the filibuster a Jim Crow relic, and you'll want to join the movement to end it, for the sake of our economy, our democracy, and our planet.

— Heather McGhee, author of The Sum of Us: What Racism Costs Everyone and How We Can Prosper Together

Adam Jentleson is a creature of the Senate and no one understands it better than he does. This iconic American institution has been severely damaged by feckless Republican senators who kowtow to every erratic action of Donald Trump. Jentleson understands restoring the Senate to the Framer’s vision as an exceptionally strong deliberative body is essential to restoring our democracy.
— Harry Reid, former U.S. Senator and Senate Majority Leader

The Senate is now profoundly rigged, with rules that make it easy to pass tax cuts for the rich and to pack the courts for the powerful, but allow the minority party to block bills to assist ordinary families. The Senate is now the graveyard for bills to improve health care, housing, education, worker rights, or to tackle issues like criminal justice, immigration, gun safety, or climate chaos. The biggest culprit of this corrupted, paralyzed Senate is the filibuster, which was born out of the determination of white, wealthy, privileged interests to block civil rights for minority Americans. If you want to understand the Senate’s descent, and its potential path back to relevance, and how vital that path is to restoring a government ‘of, by, and for the people,’ then this book is essential reading.
— Senator Jeff Merkley

[A] must-read.
— Anand Giridharadas, bestselling author of Winners Take All

The Senate is the epicenter of American political dysfunction: the place where ideas with broad support are sent to die while those backed by plutocrats and extremists are set into law. In this analytically rich yet highly readable insider account, Adam Jentleson shows why today’s undemocratic Senate is an affront to the Framers’ vision—and how we can fix it.
— Jacob Hacker, best-selling coauthor of Let Them Eat Tweets and Winner-Take-All Politics

A provocative portrait of a dysfunctional—by design, it seems—U.S. Senate.... The Senate has been in a long state of decline, writes Jentleson, public affairs director at Democracy Forward and former deputy chief of staff to Sen. Harry Reid.... An astute and maddening account of a broken institution and, in turn, a broken democracy.
— Kirkus Reviews